A square and a small street just at the main shopping street Kalverstraat called Het Spui is central to the Amsterdam book scene. 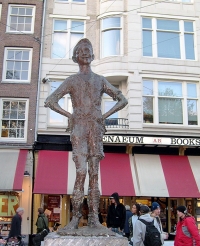 A small monument representing a street boy called Lieverdje ('Sweetie') stands in the middle of Het Spui. It is an important sculpture for the Amsterdam cultural tradition, because it is from the artistic happenings staged at this monument in the 60-ties of the 20th century, Amsterdam social reform Provo movement has began.

If you stand on Spui facing the sculpture, you will have three bookshops (Nieuwscentrum, Athenaeum, American Book Center) right behind the monument and to your right, just about 100 meters further, another big bookshop (Waterstone's). Next to the American Book Center, on the right there is a gate leading to Begijnhof. Behind you, again only 100 meters away, there is a Koningsplein with the biggest bookshop in town (Selexyz-Scheltema). All these shops sell mainly English and American books.


To complete the scene, you will have to realize that each Friday, the space to the left is taken by the book market, where several bookshops from all over town and out of Amsterdam have their stands. Additionally, a Dutch children’s bookshop (Kinderbookwinkel) is just 20 meters into the Nieuwe Zijdse Voorburgwal Street and a huge supermarket-like bookshop at Kalverstraat (De Slegte) selling Dutch and English books, is only 5 minutes away walking direction the Dam square. 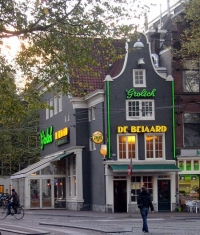 Are you tired of looking through the books or reading? To your left there is one of the most popular Amsterdam literary cafés - De Zwart (Spuistraat 334). Do you have a writer’s block? Next to De Zwart you may find a known bar (Dutch: proeflokaal) called Hoppe (since 1670, Spui 18-20) in the afternoon full of executives releasing their stress.

Hungry? To your left you have very popular in Amsterdam French style Café Luxemburg with small meals, which New York Times called 'One of the world's great cafés' (Spui 24). A bit further, on the corner, you also have a beer bar called De Beiaard, Dutch for carillon – (Spui 30, Grolsch and Guinness Stout are there among many draught beers).