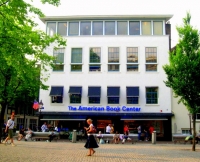 American bookshop in Amsterdam bears a proud name of American Book Center, for short - ABC. Its owner and founder Lynn Kaplanian Buller and her husband turned it into a real center of Anglo-Saxon cultural activity in Amsterdam. Not only they have on the three floors of their shop best possible selection of books and magazines in English, but the ABC organizes meetings with authors, signing of their books, conferences on various subjects, workshops for writers, all kind of courses(as yoga) and even performances of the upcoming artists in the Open Mike series. It all happens in their Treehouse space, which is also an art gallery, exhibiting mainly photography. They have a secnod shop in the Hague and an additional cultural space with it called Treehut. 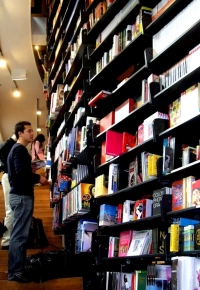 American Book Center in Amsterdam is conveniently located at the Spui 12, just next to the Begijnhof entry and not far from the Bonneterie and Kalvertoren. It has moved only in 2006 to its present location in the three hundred years old building with a long tradition, where among others centuries ago Metz Company, Amsterdam most luxurious department store has been located. You may still notice on the outside of the ABC bookshop the traces of its direct predecessor, the Ypma grand piano store. Inside it is a modern, nicely designed and well lit space. Rough sections of a large tree were placed on each of the three floors, probably to give a customer feeling of a real tree house.

For a book lover, ABC will be more like a department store. You will not find everything here, for that you would need a building like a high scraper, but the selection is ambitious, the store is conveniently organized and the ABC service is very friendly. American magazines are on the ground floor, just in front of them, deep inside the store, you will find always-attractive sales. Travel guides are to the left from the entry, up along the staircase and all attractive rest is still higher above.

The American Book Center is well accessible for the handicapped, with a lift located at the back of the ground floor and all floors adapted.