The lively nightspot and market square Nieuwmarkt, found in the old city centre just east of the Red Light District, has been a centre for commerce and socialising in Amsterdam since the 17th century. Created by filling in the surrounding canals, the square's location just inside the old city gate made it a popular spot for traders and shoppers looking for fresh produce. Today, Nieuwmarkt still holds a daily market as well as an organic fare market on Saturdays, but arguably its biggest draw is the amount of cafés, restaurants and coffeeshops that surround it, making this square a perfect place to spend a sunny day sitting on a terrace. The Nieuwmarkt metro stop can be found on the square, which caused quite a bit of protest during its construction but now serves as one of the city's most central and most used stops on the metro service. 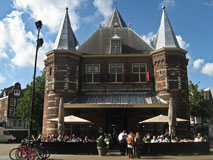 Dominating the square is the picturesque and stately building, de Waag, which means the Weigh House. This was originally St. Anthony's Gate, and was a major entry point to the city before the old city walls were torn down. Since then it has been a weigh house, a guild hall, a museum and is famous as the location where Rembrandt painted The Anatomy Lesson of Dr. Nicolaes Tulp. These days, de Waag's bottom floors host one of the most popular Nieuwmarkt restaurants, Café in de Waag, while the upper floors are closed to the public.

A very lively spot for partygoers, the many Nieuwmakt cafés offer something for almost any visitor to the city, as well as being popular among the city's locals. Some of the more acclaimed places to be include Café Cuba, a latin style bar that is always in demand for cocktails with the Friday evening after work crowd, and the chic little corner café, 't Tuinfeest, a favourite of Amsterdam's foodies.

There are many more Nieuwmarkt cafés and bars to visit, and visitors to the city should be sure to check out the terraces of the Temple Bar Irish pub for a pint and some hearty pub grub or Café Fonteyn for a Dutch brown café experience. Those who have come to Amsterdam for some of the city's more relaxed policies may wish to check out Hill Street Blues on the Market, Nieuwmarkt's most well-respected coffeeshop.

Those looking for something to eat will be spoiled for choice here, as the many Nieuwmarkt restaurants are packed almost door to door. For Dutch or European cuisine, there are a number of classic restaurants in the surrounding streets, such as the upmarket Ships Chandler's Warehouse, which specialises in large groups, or the rustic Italian Ristorante Gusto.

Amsterdam's Chinatown surrounds the northern edge of the square, making it the perfect place to come for Chinese, Malaysian and Thai restaurants. Some of the Asian Nieuwmarkt restaurants that must not be missed include the authentic Thai restaurant Me Naam Naan, with its acclaimed food and traditionally dressed staff, or any of the three Nam Kee Cantonese restaurants operated by the Chan family just north of the square.

Nieuwmarkt has traditionally always been a market square, and that continues today. Throughout the week, one or two stalls can be found usually on the west side of the square. On the weekends, however, the market comes alive with the farmer's market selling organic fruit and vegetables every Saturday and the antiques market with its selection of oddities, clothing and decorations every Sunday from May to October.

Its location in the heart of the city centre means that Nieuwmarkt is close to a number of hotels and hostels. These range in price and service from the cheap and cheerful Shelter City Christian Hostel on the edge of the Red Light District and the Globe hostel in the heart of the Zeedijk to the upscale, 5-star Grand Hotel Amrath just a short distance away on Prins Hendrikkade. Apart from the hotels there are several quality apartments for rent on Nieuwmarkt.

Nieuwmarkt in Amsterdam on the map