Found right beside the bustling market square of Nieuwmarkt and the ever popular Red Light District, the Amsterdam Chinatown area consists of a number of city blocks crammed with Asian markets, restaurants and shops. The name Chinatown is a bit inappropriate, as in this part of the city you will see businesses and residents from many different Asian cultures such as Thailand, Malaysia and Indonesia. The Amsterdam Chinese are a very well represented expat group within the city however, and here you will even see street signs in Chinese as well as Dutch. 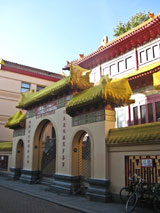 The most important tourist sight within Amsterdam's Chinatown is without doubt the Zeedijk Buddhist temple, known as Fo Guang Shan He Hua. The temple can be found on the Zeedijk street in the midst of all the shops and bars but always remains tranquil. This impressive building, with its brightly coloured walls and distinctive Chinese roof, is the largest Chinese style Buddhist temple in Europe and has stood here since 2000, when Queen Beatrix herself performed the dedication ceremony. The temple is free to visit every day except Monday, up until 5pm when it closes.

The former gatehouse turned Royal College of Surgeons that forms the central building of Nieuwmarkt and now serves as a rather pleasant restaurant and café.

A short walk from Chinatown in Amsterdam is the Montelbaanstoren at Oudeschans 2. This historic tower has stood since 1516 and was originally part of Amsterdam's naval defence network.

The Amsterdam Red Light District is known mainly for its nightlife but it is also its oldest neighbourhood. It is recommended to visit this part of town also during the day and look around. Read more on our Red Light District page.

Nearby Oude Kerk (old church) is definitely a sight to look at. Not to be missed.

As the centre of Asian culture in Amsterdam, Chinese markets and souvenir shops can be found dotted throughout this area. Oriental Commodities at Nieuwmarkt 27 is a large, for Amsterdam, Chinese supermarket that carries many traditional Asian delicacies. The aisles may be narrow, but squeezing your way through here can be worth it for some great deals on dried squid and other wonders of the East.

Dun Yong has been a fixture of Amsterdam's Chinatown since 1959 and is interesting to visitors for a number of reasons. As well as selling some tasty Asian treats, this shop offers a wide range of decorations and other souvenirs as well as cooking lessons through their Flavours of the Far East cooking studio.

One of the most noticeable things about Chinatown in Amsterdam is the amount of restaurants that can be seen everywhere. It's impossible to miss these establishments due to the cooked duck that is almost always hanging in the window, either and enticing or revolting sight, depending on your appetites. Amsterdam Chinatown restaurants are more than just Chinese and here you will find many great Thai restaurants as well as Asian Fusion and, of course, a good representation of Chinese restaurants.

The most well known Chinese restaurant in this part of Amsterdam is Nam Kee, found at Zeedijk 111 - 113. This family run restaurant has a number of locations throughout the city, but the ones in Chinatown are by far the most popular. Thai restaurants also abound, with places such as the ever busy Snackbar and Restaurant Bird at Zeedijk 72 - 74 being firm favourites with locals and expats alike.

Amsterdam chinatown on the map