On almost any day, especially during the warm summer months, a few stalls can be found here selling jewellery or fresh food, but the real action is reserved for the weekend. At these times, the cafés and restaurants on Nieuwmarkt are full to bursting as visitors stop off for refreshment during their shopping spree or simply relax on one of the many terraces and watch market life unfold in front of them.


Short history of the Nieuwmarkt market

The New Market Square (Nieuwmarkt) has been an Amsterdam market since the 17th Century, when farmers would come here to sell produce from their plots at the square just inside St. Anthony's Gate. Over the centuries, the layout of the city has changed such that Nieuwmarkt is no longer at the edge of the city limits, but considered almost in the centre. St. Anthony's Gate has also changed a lot, with the gatehouse, the picturesque building known as De Waag, being previously a weigh house, medical college and now a restaurant. The use of the square has changed little, and it still plays host to some of the most well thought of markets in Amsterdam. 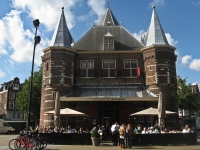 Every Saturday throughout the year, Nieuwmarkt returns to the old Amsterdam market it was intended to be as stalls selling organic produce return to colonise the square. In an echo of bygone days, at this market you can purchase fresh vegetables and flowers direct from the producers, or at least without the involvement of any large scale distribution companies. The selection may not be as wide as at the famous Amsterdam flower markets, but there are almost certain to be less crowds.

As well as buying fruit and veggies to take home, there are a few stalls here where you can pick up something to keep you occupied as you stroll around. Of particular note are the stalls selling fresh squeezed orange juice and one that offers corn on the cob, boiled in front of you and coated in rich, salty butter. The farmer's market at Nieuwmarkt takes place every Saturday and runs from 9 am until 5pm. 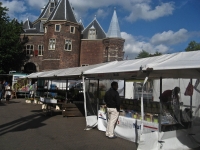 During the warmer part of the year, vendors take advantage of the weather to lure shoppers back to this Amsterdam market on Sundays with an antiques and clothing market. The Sunday event may be referred to as the antique market, but the offering here ranges from bric-a-brac of unknown age to original ornaments and toys made by local young designers. If you're not looking for something to stick on your mantelpiece or hang on your wall, there are plenty of clothing stalls that sell ponchos, scarves, hooded tops and other items of alternative apparel.

While it may not have the selection or sheer number of stalls that the nearby Waterlooplein market has, the fact that it is open on a Sunday makes the Nieuwmarkt antiques market a great spot for a bit of late weekend browsing. The antiques market runs from May to October and is open on Sundays from 9am to 5pm.

Nieuwmarkt in Amsterdam on the map