Museum Geelvinck Hinlopen has been closed in Amsterdam and the collection has been moved to Zutphen. 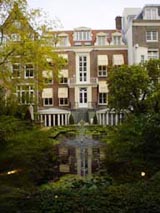 Everything about the Geelvinck Hinlopen House was designed and built to showcase the wealth and position of the owners Albert Geelvinck and Sara Hinlopen. The Geelvinck family were active in the East India and West India trading companies, and in1687, built this house as a family home suitable for entertaining business guests.

Since then the house has been a bank, and there is still a large vault in one of the souterrain rooms. Four rooms on the ground floor have now been restored, and are open to the public on Sundays.

You enter the museum from the old coach house at Keizersgracht 633, and pass through a delightful garden to reach the house. Cascades of pink roses surround the pond in summer, in autumn it is glowing with colour. 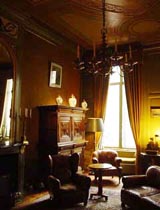 Of the four rooms one is a library with deep leather chairs and a wonderfully decorated ceiling was revealed when the house was renovated and has been restored to its 19th century glory. Two others, the Red and Blue rooms were the drawing and dining room respectively, and have period paintings and furniture sourced from other houses.

The most interesting room is the richly decorated Chinese room. It was probably a room for Sara Hinlopen to receive lady guests for tea. In that time coffee was seen as too stimulating for the ladies, and was only taken by gentlemen in coffee houses around town. Looking at the painted chintz walls and Chinese porcelain you can imagine the rustle of gowns and the gentle flow of gossip over a cup of tea served in fine china.

The museum rooms are offered for special events. Professional catering is also available.

The museum rooms are offered for special events. Professional catering is also available.

Geelvinck Hinlopen Huis in Amsterdam on the map