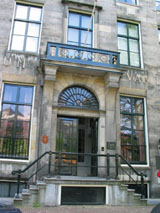 A small, but very interesting because of its local, intense sphere, Museum Van Loon is in fact an impressive patrician house like many in the center of Amsterdam. This is your unique chance of entering such a house, still privately owned by the aristocratic Van Loon family, which about thirty years ago decided to open it to the public. There are still parts of the house which remain closed to the visitors and although its owners do not reside in the house, you may sometimes get a glimpse of their relatives or friends sneaking through the museum to their closed quarters. You will be allowed to visit the kitchen, the garden, wander through beautiful reception rooms, climb the stairs up to the private quarters on the first floor. Exhibition is presented in a way to give you the feeling that the owners have just left for a walk. Bread in the kitchen has dried out, true, may be even has been covered with a layer of plastic and paint, but you will get a rare chance of getting the feel of the Dutch life from inside. The china is on the table, sheets cover the beds, fine paintings look at you from the walls.

Visit to this museum is for free with I Amsterdam City Card. You also get public transport, museums and attractions entry and canal cruise. It is highly recommended for tourists.

About the owners - the Van Loon family

The Van Loon family traces its origins in Loon op Zand, a village near Den Bosch. Van Loons were active merchants, one of the founders of the Dutch Far East Company – V.O.C. In the middle of the 17c. part of the family settled in Amsterdam, where they in the years to follow became the regents of the city. The house at Keizersgracht 672 has been bought by them in 1884 and they still own it. On the walls of the house, you may see tens of paintings as well as old photographs, documenting the van Loon family history.

Here is the traditional Dutch canal house with the garden and the coach house behind. It has been built in 1671 together with the identical twin house on the parcel next to it (Keizersgracht 674) for Jeremias van Raey, Flemish merchant, by the architect Adriaen Dortsman, who is known for his other buildings in the city.

On the top of the façade, four figure sculptures were placed, representing Mars, Minerva, Vulcan, and Ceres, personifications of war, justice, fire, and agriculture – four sources of the owner’s wealth.

Van Raey from the beginning, rented the house to the famous pupil of Rembrandt, Ferdinand Bol. The painter lived in it until 1680. The house has been changing hands during the centuries afterwards. Its present interiors and decorated staircase are result of the reconstruction at the end of the 18 century by the Van Hagen family. As always in a Dutch canal house, the kitchen is in the basement, on the elevated ground floor the reception rooms are located, on the first floor - bedrooms, on the second floor - servant’s quarters with the attic above. All rooms are splendidly decorated as centuries ago. The table in the Dining Room is fully dressed, Blue Drawing Room and Red Gents Rooms are filled with beautiful objects from the epoch, bedrooms on the first floor furnished give the idea of the life in the house before centuries.

Like many of the patrician Amsterdam houses from the second half of the 17c. , the house has a coach house with stable, which around 1920 has been turned into a garage of Willem van Loon automobiles. Later rebuilt, it serves now as a separate residence.

Restored with the big taste, with many Old Dutch paintings and interesting objects, Van Loon house testifies about the originality of the civilization of the Netherlands throughout the centuries. Worthy seeing, if only to sit for a while on a bench in it quiet garden.

Exhibitions at the Van Loon Museum

The Van Loon Museum organizes exhibitions, which complement the unique, private character of the house. For example in 2005, the exhibition documented the history country estates of the Van Loon family between 1600 and 1900. At the same time often, modern art is presented on the walls of the house, recently the paintings of the New York artist Lisa Margolis.

Guided tours on request. The price for a guided tour (ENG/NL) is €79. If the tour takes place after closing times, there will be added an extra €79 after hours fee. Reservations can be made via: info@museumvanloon.nl

Museum Van Loon in Amsterdam on the map