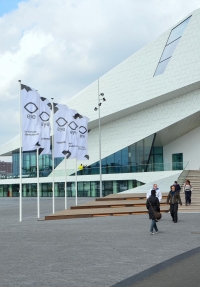 Previously centrally located in a 19th C. pavilion in the Vondelpark, Dutch Film Museum incorporated in 2009 three other film institutions and has been renamed into The EYE Film Institute Netherlands. At the same time construction of the new museum started. In April of 2012, the Queen opened the new museum. Located on Amsterdam’s waterfront just behind the Central Station, therefore easily accessible with a free ferry and open until late at night, The EYE Film Institute has immediately become one of the main attractions of the Dutch capital.

The museum permanent exhibit in the basement is free. It composes of various visual and interactive elements. Suitable also for kids.

This museum visit is offered for free with the I Amsterdam City Card. You also get free public transport, free museums and attractions and free canal cruise. It is highly recommended for tourists.

Designed by the Viennese architectural firm Delugan Meissl Ass., which had numerous successes in architectural competitions and which became famous for their Porsche Museum in Stuttgart, the EYE building corresponds in its design with the located nearby high-rise Shell Oil tower. Constructed at the Ij Lake in the years 1965-1971 and now called Overhoeks Tower since Shell is no more the building’s owner, it is today regarded as the classic example of the Dutch architecture of 1960-ties. While the Overhoeks Tower is a rather modest building turned at 45 degrees to the lake, the new Eye edifice strives to emanate power and modernization. It brings to mind architecture of steel and concrete of the Soviet era of 1970-ties. Then again, a tourist will be pleasantly surprised upon entering the building, where intelligent division of 1,200 sq. meters of exhibition space, beautiful lighting and a simple white modern finish captivate visitors. 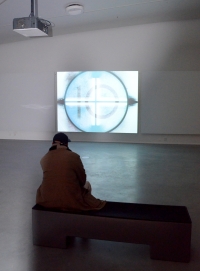 The EYE Institute offers a visitor a large choice of attractions. First, there is a permanent history of cinema exhibit located in the building’s basement, with six car-like booths offering a multimedia cinema quiz. Then there are interesting temporary shows, which also use most modern ways of presentation. Four cinemas are constantly projecting classic films. There are three smaller halls – one of 67 seats with a nostalgic character of Paris cinema of the year 1900, two with 130 seats and a big screening auditorium intended for film premieres with 315 seats. Several intelligent multimedia art installations additionally entertain a visitor. There is constantly something interesting happening at EYE, and there is plenty of breathing space, which is so rare in our overcrowded world.

The EYE is more a temple of cinema, than a museum or cinémathèque. There is a lot to see and to do: permanent exhibit in the basement and art installations are fun, selection of movies is great, while the museum’s restaurant on the waterfront is an ideal place to rest after a busy and tiring day in the Old Amsterdam center.
The EYE is probably one of the best film museums in the world, but while the other are located far across the oceans, if you visit Amsterdam or live in the city, this one is a must to see. 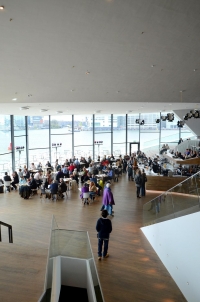 The museum has a shop with film memorabilia, DVD’s and postcards and a bar – restaurant which is open as long as the museum; the restaurant kitchen closes at 10 P.M. The film museum library and its archive remain temporarily at other locations, please inquire them about their exact address.

How to get to the EYE

walking: take a free ferry from the quay behind the Central Station and walk, first ferry from the left; line 56 direction Buiksloterweg, walk left along the Ij lake quay; ferry departs also at night every 12 minutes – ca. 10 minutes including the trip over the water
public transport: from the Central Station ferry is much better option; should you arrive from North of Amsterdam take bus line 38 and exit on the stop ‘Buikslotermeer’
by car: from the Amsterdam ring A10 North take an exit S118, drive East along Johan van Hasselweg and almost immediately left into the Van der Pekstraat. If you drive from the center of Amsterdam, ride through the Ij Tunnel under the Ij Lake and turn left the Johan van Hasselweg and again left into the Van der Pekstraat. Paid car park for the Eye visitors is located at the Badhuisweg 3, 1031 CM Amsterdam - a small street near the Institute (120 spaces).

EYE Film Institute in Amsterdam on the map