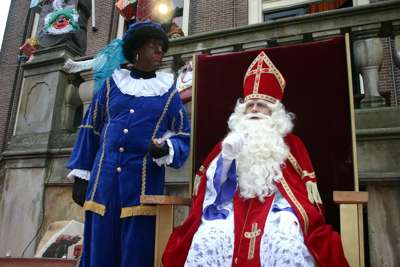 Saint Nicholas arrives to Amsterdam by ship and upon landing, rides on a white horse through the city center in a festive parade. Large crowds of children greet him and his entourage, as he is usually surrounded by no less than 500 Black Peter servants, 10 marching bands and hundreds of festive marchers. The parade culminates with the mayor of Amsterdam welcoming Saint Nicholas. According to the tradition, during the weeks after, Saint Nicholas stays in town and is more important than any civic authority. Saint Nicolas arrival also starts a festive shopping time in the Netherlands, which lasts until 5th of December, the eve of Saint Nicholas Day, as on this the day the Dutch used to give themselves the seasons gifts. In the modern consumer society, this period extends in Amsterdam until Christmas, or even longer - up to first days of January in the New Year.

The Dutch tale of Saint Nicholas

The tale goes, that Saint Nicholas lives somewhere in Spain. Already in October of each year, the post in the Netherlands receives letters sent to Spain from children asking for gifts. In the middle of October Saint Nicholas leaves Spain on a steamboat, to arrive to the Netherlands a month later. He first lands each year in a selected provincial city, different each year, then travels throughout the country appearing in many parades, reaching Amsterdam several days later. 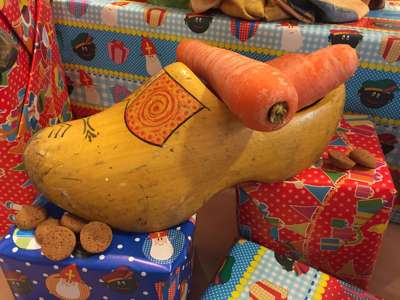 When Saint Nicholas is already in town, children put before going to bed a carrot in their shoe, meant as a food for the horse of Saint Nicholas. Saint Nicholas uses his able Black Peter servants to deliver his surprises at night and to collect the carrots. They climb the houses on ropes and get unnoticed inside the Amsterdam houses through the chimney on the roof. It belongs to the tradition that a beautifully wrapped package, with a surprise gift inside, has also inside a short, funny poem describing the person receiving the gift. While all the gifts are brought by Saint Nicholas himself, the poem should also be written in his name.

The American tradition of celebrating Saint Nicholas, derivates from the Dutch tradition - it has been introduced in the US by the first Dutch settlers.

In the Netherlands, anything done for the sake of children has been always very important. Saint Nicholas parade has been celebrated in Amsterdam since 1934, and since November 22, 1952 it has been transmitted live on the national TV. The parade became an important city event organized by a special foundation. Thousands of policemen, firemen and municipality workers contribute to the celebrations. An estimate of 300 000 children greet Saint Nicholas on his way through the streets of Amsterdam.

According to the folklore, Saint Nicholas had a servant boy named Black Peter (Zwarte Piet), dressed in medieval, colorful costume. His skin was black, because he had to climb the chimneys to get inside the houses to deliver the gifts. Canadian soldiers who liberated part of the Netherlands during the WWII introduced the idea of several black servants. Last years the voices have been raised, that the color of skin of the servants might feel derogatory to some members of the black community. The historians reminded the public, that in the middle Ages black servant symbolized the devil forced into obedience by Saint Nicholas and worse - in several countries Saint Nicholas companion is traditionally a devil like person. A couple of years ago, the decision has been made to taint the skin of some of the Saint Nicholas' servants to the colors of the rainbow. To justify this change, Saint Nicholas rode under the rainbow gate at some moment of his parade. Luckily this controversy seems to have died down during last years.

Unique, warm and festive occasion - a real must for children. Literally tons of candies are given away everywhere Saint Nicholas appears. If you are allergic to crowds, do not go to the meeting with the mayor. Greet Saint Nicholas earlier on his way through the city.

As always in a big crowd, look well after the kids and beware of pickpockets.

Check the local press for the time schedule of the Saint Nicholas parade and its route. The meeting with the mayor usually takes place on the Leidseplein, on the Stadsschouwburg balcony. In the days after the arrival, Saint Nicholas takes part in many events in the city. Check the organizers website for the program.

Sunday, middle of November each year.

The main event of the next Sinterklaas celebrations will be held on the date 17 November 2019.