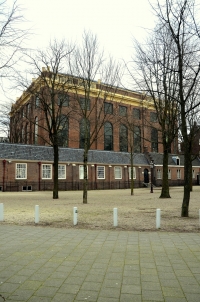 The Portuguese Synagogue is an awe-inspiring testimony of the vibrant and rich Jewish culture in Amsterdam in the seventeenth century. The beautiful building, modelled after the Temple of Solomon, was the biggest synagogue of its time. It is still a functioning synagogue, but it is also open to visitors.
Address: Mr. Visserplein 3, Amsterdam

The synagogue of the orthodox-Ashkenazi congregation. The congregation was founded in 1635.
Address: Van der Boechorststraat 26
www.nihs.nl

One of the oldest functioning Ashkenazi synagogues in one of the nicest quarters of Amsterdam, de Pijp. It was build in 1892. Because of its insuspicious architecture the nazis did not know about this synagogue and it therefore survived the war unscathed.
Address: Gerard Doustraat 238
www.gerarddou.org

Synagogue of the Dutch Union for Progressive Judaism in Amsterdam

The synagogue of the Liberal Jewish Congregation in Amsterdam is now situated opposite the Olympic Stadium, but a new synagogue is being build in the Rivierenbuurt.
Address: Stadionplein 269
Phone: 020 54 00 120

Beit Ha’Chidush is an independent modern-progressive Jewish community for anyone with a Jewish background, both paternal and maternal. We hold services at least three times per month in the historical Uilenburgersjoel, built in 1766. All are welcome.
Address: Nieuwe Uilenburgerstraat 91
Phone: 087 8765225

Bendigamos is the fastest growing Jewish community in the Netherlands. They offer a welcoming environment where they hold shabbat services and organise meals, educations and parties. The services are orthodox and follow the ancient S&P Sephardic tradition. Once a month, there is a special children service for kids ages 7-12.
Address: Amsterdam Buitenveldert
Exact address through BendigamosNL@gmail.com
website: www.bendigamos.org