The tulip has been introduced in the Netherlands in the middle of 16th century from the Ottoman Empire. Until today, this flower remains the Dutch favorite, one of the symbols of the country. A small private museum just across the bridge from the Anne Frank House, shows the history of the Dutch fascination with the tulip and sells in its shop various bulbs of the most beautiful existing flowers.

At the end of the 16th century a new flower – tulip arrived to the Netherlands and immediately became very popular among the upper classes. It is difficult to establish the exact date of the first cultivations of tulips in the Netherlands, but it is generally admitted that around 1550 the bulbs reached the country on ships arriving form Constantinople (modern name Istanbul) probably via Antwerpen. The first documented flowering of tulips was in 1594, in the Hortus Botanicus (Botanical garden) of the University of Leiden. The bulbs were brought to the university garden from Vienna by Carolus Clusius, previously responsible for the Imperial Garden in Vienna. At that time Austria had the disputed borders with the Ottoman Empire and as well as the rest of Central Europe, has been under the Turkish cultural influence, expressing itself among others in the oriental fashion and the new habit of drinking coffee.

As the Netherlands went through a period of unprecedented economic boom in the first half of the 17th century, competition among growers started, who will have the most beautiful tulip. People were ready to pay extraordinary sums of money for a single bulb. It seemed that if they would have carefully cultivated their tulips they could have never lost, getting more and of precious bulbs, while the prices rose constantly. Slowly the intense speculation started and batches of some rare bulbs had a higher price than a house and were growing in value. In 1635, a set of 40 bulbs has been sold for 100,000 florins while a medium yearly income in the Netherlands at the time was 150 florins.

In 1636, stock exchanges were established to trade in bulbs and their future options. Despite the different attempts by the authorities to limit the craze, the trade grew and people were selling land, houses and valuable objects to invest in tulip bulbs. The most famous bulbs as Viceroy or Semper Augustus were priced at thousands of florins. The Dutch called this phenomena themselves ironically a windhandel (trading in wind). Indeed, in 1637 the market crashed, leaving some traders enriched, but most of the public with just some pretty flowers.

Today, the tulip mania, tulipomania or tulip madness is used as a term for any economically absurd group craze where speculation borders with senseless gambling. The Dutch, although a bit ashamed of their own past behavior, still love tulips.

A Dutch company trading in flower bulbs, also active in the US, established this small and nice Tulip Museum below its shop with flower bulbs at the Prinsengracht. Several main areas of interest as the history of the tulip and its cultivation as well as tulip mania are documented.

This is a friendly, small museum about the cultivation and the history of tulip, very complete through the multimedia presentations on several LCD screens. A must for people interested in gardening, flowers and of course history of the tulip mania in the Netherlands. 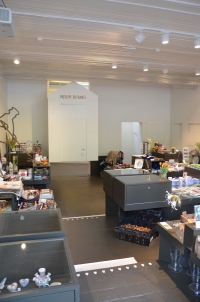 Admission to the museum shop called ‘Bollenmaand’ (‘Basket of Bulbs’) is free.

How to get to The Tulip Museum

The Amsterdam Tulip Museum is located on the opposite side of the Prinsengracht canal, opposite the Anne Frank House. You may get there walking form the Anne Frank House (1 minute), from the Central Station (15 minutes) direction Westerkerk (Western Church).
By tram: from the Amsterdam Central Station take tram lines 1, 2 and 5 or by bus lines 21, 170, 171, 172 (Westerkerk tram stop).
By car: closest car park is the Q-Park Europa Parking, Marnixstraat 250.

Tulip Museum in Amsterdam on the map