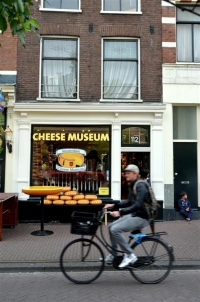 Dutch cheese has more than 600 years long tradition and the names of different sorts of cheese are often taken from different cities in the Netherlands – Gouda, Edam, Leerdammer, Leyden, Maaslander, Maasdam and of course a gourmet Old Amsterdam.

The European Community laws protect now some of these names as produced only in certain regions in the Netherlands (so called Protected Geographical Status), but most of Dutch names are in general use in the whole world to specify sorts of cheese also produced elsewhere.

Just a step from Anne Frank House, on the other side of the Prinsengracht a small museum has been organized, dedicated exclusively to Dutch cheese. It is an attractive shop with also an exhibition part and one of the sellers always wears the traditional Dutch clothes.

On the ground floor when you come in you can taste the different varieties of traditional Dutch Gouda cheese. Then, if you take the stars down, it will lead you to a little Gouda cheese museum. There you can find various educational information (videos, pictures and written text) about the history and the production of Dutch cheese. Moreover, the employees also give guided tours of the museum. Finally, there is also a “photo corner” where visitors can dress up as Dutch farmers and take a picture. This is all free of charge. 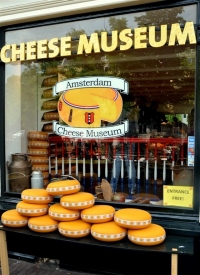 Because of its limited space, the Amsterdam museum will be never able to compete with the Dutch Cheese Museum in Alkmaar, but as it is just around the corner so you might visit it passing through. It is interesting to see all the wealth of Dutch cheese varieties together and freely taste and compare their different sorts.

Entry is free of charge.

How to get to Amsterdam Cheese Museum

Walking: from the Anne Frank House – 5 minutes
By public transport: from the Central Station – tram 13, 17 and bus no. 21, 170, 171 stop: Westermarkt
By car: from the Amsterdam ring A10 exit on S105 and continue driving until you reach Bloemgracht; metered street parking or Q-Park Europa at Marnixstraat 250 (€ 4 per hour).

Cheese Museum in Amsterdam on the map