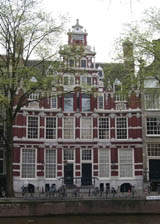 From the market square…

In this exhibition, you can follow the development of theatre in the Netherlands. Playing Space begins in the early middle ages. Travelling players would perform farces on the market square in the midst of merchants and quacks. You can also find out about the official drama that was produced by the dramatic societies at the end of this period, commissioned by the city.

…towards the classical playhouse…

The first playhouses opened in the 17th Century. People started levying admission fees. Playing Space considers the consequences: the audience and the character of the theatre changed. In addition to drama, new genres came into existence such as opera and ballet. Scenes, costumes and lighting played an ever greater role in the playhouses.

In addition to the classical playhouse, a new sort of performance space developed in the second half of the 20th Century: the flat floor theatre. Also called the black box. No stage, no curtains, no plush. The impressive sets disappeared. Dancers or actors created a magical theatre world with simple objects, light and sound. The audience would become intimately involved.

… and the theatre of today.

From dance to cabaret, from musical to drama; present-day theatre recognizes many forms and diverse performance spaces: indoor and outdoor sites, the playhouse and the flat floor. Using materials and images from tens of performances, the contemporary theatre landscape is brought to life in the Theatre Museum.

A theatre at home; the chamber theatre of Baron van Slingelandt permanent.

After a thorough renovation in 2002 Baron van Sligelandt's chamber theatre dating from 1781, one of the top pieces of the collection of Theater Instituut Nederland, is now on display in the Theatermuseum. The exhibition portrays the situation as it was in Baron van Slingelandt's home.

It is the only remaining chamber theatre in Europe and is made up of fourteen complete sets from the eighteenth and nineteenth century. The sets can be changed by the use of an authentic 18th century wooden mechanism which is housed under the stage floor. These sets served as a model for the sets of the 18th century City Theatre (Stadsschouwburg) on the Leidseplein in Amsterdam.

This building was designed in 1638 by Philip Vingboons - at that time one of the most well-known Amsterdam architects. Its neck-gable was the first of its kind to be built in Amsterdam. The walls and ceiling were painted by Isaac de Moucheron and Jacob de Wit in the 18th century. De Moucheron painted the buildings and landscapes, and de Wit painted the figures.
The unique carved staircase is a literal ‘masterpiece’ made by Jan van Logteren, a furniture maker, and spirals upwards from cellar to attic. The cupboard in the side foyer has a built-in water butt, which was connected to a pump in the cellar. The water was used to cool wine and other drinks. The drawers of the cupboard contained herbs and spices.

This house was built in 1617 by order of Willem van den Heuvel, who was the heir of Giovanni Baptista Bartolotti, a wealthy businessman from Bologna. The double house was probably designed by Hendrick de Keyser. The ceiling and the grisailles in the front parlour were painted by Jacob the Wit and the walls were painted by Isaac de Moucheron. The ceiling in the back parlour was painted by an unknown painter and was probably painted in the early 19th century. The early 20th century wallpaper is made of cardboard.