Dam Square, with its National Monument and Royal Palace may lie in the northern part of Amsterdam but there are few who would deny it represents the true centre of the city. All of the sights to be found in the old city along with a staggering amount of bars, cafés and restaurants are all within walking distance of Dam Square, as is Centraal Station. For those who wish to spend their visit to Amsterdam right in the heart of things, look no further than these Dam Square hotels. 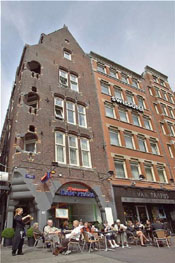 Quality 3-star hotel located in a former gold trading house in the centre of Old Amsterdam. Distinctive features include the classic Art Deco reception and lobby, originally built as a theatre in 1908.
Nes 05-23

Modern 2-star hotel in the heart of Old Amsterdam. Good location, halfway between the thrills of the Red Light District and the sights of the old city centre.
Damstraat 22-24

Basic hotel with a location close to Amsterdam's Red Light District. Reasonable rates and a 24-hour bar, a good choice for groups and younger travellers.
Beursstraat 23

Small hotel close to Centraal Station and the busy tourist area around Dam Square. The hotel's own exchange office gives good rates to visitors from outside the Eurozone.
Damrak 31

Centrally located 2-star hotel in the midst of busy Damrak. Partnership with Car Hotel Amsterdam makes this a good choice for those driving to Amsterdam.
Damrak 58

Cheap and cheerful hotel aimed at backpackers and younger travellers. Close to the Red Light District with its many bars and coffeeshops.
Beursstraat 21

Characterful hotel with Art Deco features, dating back to 1911. Located right beside Dam Square with facilities for business travellers and a large heated and air-conditioned terrace.
Damrak 93-94

Classic 4-star hotel with a rich past as one of Amsterdam's historical buildings. Famous for the numbered steaks in 'Brasserie De Poort’ and authentic Dutch bar ‘De Blauwe Parade’.
Nieuwezijds Voorburgwal 176-180