The club Sugar Factory has been permanently closed in January 2019. But there are other good music and art centers nearby. For example Melkweg and Paradiso. 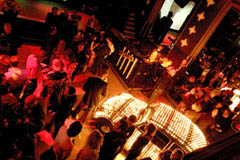 Often seen as the poor cousin to the internationally popular and prominent venues of Paradiso and Melkweg, Sugarfactory is in fact one of the less-obvious gems to be found near the Leidseplein nightlife area. With more of an artistic bent than most other venues in Amsterdam, Sugarfactory sees itself as a night theatre, blending nightlife, performance and art.

While it may not attract the same internationally famous artists as the bigger venues, Sugarfactory makes up for it by playing host to the best home-grown talent that Amsterdam has to offer as well as drawing more artistic performers from the surrounding countries. Exhibitions are regularly held here, so check the website to see what artistic experience is currently available.

In addition to exhibitions, Sugarfactory hosts a number of regular club nights. On Monday nights, Kuma presents a selection of DJs with music ranging from disco to house. Techno Tuesdays are pretty self-explanatory, with banging techno tunes on offer every week for those who want to dance the night away. Free entrance makes this a popular Tuesday choice. Night Shift on Wednesdays is a little softer, with hip-hop and house music pouring from the speakers. Wicked Jazz Sounds on Sundays takes the atmosphere to an even mellower place, ideal for rounding off the weekend. Sugarfactory also hosts live acts, although less frequently than the other Leidesplein venues. Check the venue’s website to catch some lesser-known acts that may just take you by surprise.

One notable feature of Sugarfactory is that it can be hired for private events. The reatively small size makes this possible for regular people to hire, but Sugarfactory is still a theatre and nightclub, perfect to make a birthday or bachelor party something to remember.

As befits such a staple of Amsterdam nightlife, Sugarfactory does not usually open its doors until close to midnight, and the party goes on until 05:00 in the morning. Live bands usually start earlier, finishing up around 23:00 when the club gets ready to open its doors for the late night dance crowd.

Ticket prices vary depending on the event. Regular events range from EUR 3 for Kuma, up to EUR 9.50 for Wicked Jazz sounds. For live acts, be sure to check the website before booking. Sugarfactory does not charge a membership fee on top of ticket prices, so you can be certain in advance what entrance will cost. In general, a ticket to a Sugarfactory event will cost less than other Leidseplein venues, as the acts are less internationally known.

Sugar Factory in Amsterdam on the map