History of the Rembrandt House 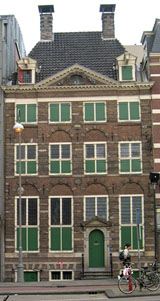 The house was built in 1606 and this date painted in gold decorates until today its front wall. It is relatively wide, built on two adjoining lots, then in the new and fashionable eastern part of the city. Many successful merchants and financiers also bought houses in this new part of town.

In the years 1627-28, the house was rebuilt by the famous then architect Jacob van Campen, who later built the Amsterdam Town Hall (now the Palace in Dam Square). The completely new façade has been built, the house has been enlarged and rebuilt inside. It became one of the nicest houses in the whole city.

Barely 33 years old Rembrandt purchased the house for an exorbitant sum of 13,000 guilders. He was at the height of his fame. Rembrandt lived in the house with his beloved wife, Saskia van Uylenburgh, from1639. It was an obvious sign of his position of the most known painter in the city, which had been then a financial center of the whole world. For today’s standards, it would be like Andy Warhol buying a Fifth Avenue townhouse in New York.

Saskia, beautiful and rich daughter of the mayor of city of Franneker and the cousin of Rembrandt’s art dealer Hendrick van Uylenburgh, died of tuberculosis only three years later. From their four children only the son Titus was to live to his adult years, but he also did not live longer than his father.

Rembrandt’s career faltered. He was not able to pay his debts and in 1656, he was declared insolvent. The creditors took over the house and together with Rembrandt’s possessions sold it for 11.000 guilders in 1658, to cover the painter’s debts. The exact list of everything Rembrandt owned at the time has been made prior to these auctions. Today’s Rembrandt House Museum interiors are largely a reconstruction based upon these documents.