Geographically a difficult area to live, the ancient Netherlands had for its inhabitants Celtic and German tribes, one very important feature - safety. Its rivers, lakes, wetlands, and woods were impossible to cross for the invaders.

It is only in the 1st century BC, that the ancient Roman Empire conquered the southern part of these lands establishing an important military post in Nijmegen. North of the today’s Netherlands remained not conquered nor even invaded. Under the Roman administration, prosperity grew for almost three hundred years.

As the Roman state got weaker, barbaric Germanic tribes started to invade the land. Most powerful of them, the Franks invaded the territory in the 5th century and brought the Christianity with them. By 800 today’s Netherlands was a part of the powerful Franks Empire of Charlemagne. It is in Nijmegen that Charlemagne built one of his palaces. Tradition says that Nijmegen was his favorite residence, while Aachen (today in Germany) was the empire’s capital.

Economical growth in the Middle Ages

After the fall of the Charlemagne Empire (he died in 814) the Low Countries territory has been divided into several smaller states – ruled by dukes and counts. At the same time, already in the Middle Ages, a strong economical development made the Netherlands one of the richest areas in Europe. Agriculture along with crafts and commerce, rich towns and important trading links reaching as far as Asia and North Africa, transformed the Netherlands into the area where the feudal power has been limited, safety of movement and economical activity established, sustained growth possible.

Renaissance and fight for independence

The neighborhood powers – first Dukes of Burgundy and later the Habsburgs (after 1477, the marriage of Mary of Burgundy to Archduke Maximilian Habsburg) tried to dominate the Netherlands and introduce its taxation there.

In 1555, Charles of the Habsburg dynasty granted the Netherlands to his son, Philip II, king of Spain. As Philip II was, a Catholic and part of the Netherlands protestant the Dutch resisted not only the new taxation, but also the intolerance and oppressive methods of administration of the Spanish king and his governor Prince Alba. A long eighty years lasting war began. Feeling of the national identity developed in the Netherlands during this war.

In 1581, the Union of Utrecht proclaimed independence from Spain. The new nation suffered a series of reverses in the war, but finally in 1648 the Spanish recognized the sovereignty of the Republic. The Dutch Republic remained until 1794 at least nominally, under the power of the Austrian throne of Habsburg. 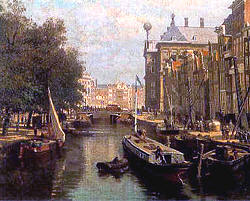 Despite all the war destructions and hardship, the Dutch continued expansion on the seas and discoveries of the new routes and lands. By the mid-17th century, the Republic was the biggest maritime power of Europe, and Amsterdam was the most important financial center of the continent. Naturally, wars about the domination on the seas with England and wars to resist growing power of France on the mainland followed.

Beginning of the 18th century, with the domination of the big absolutist empires of France, Austria, Russia, and Prussia on the continent, and United Kingdom on the sea, the demise of the tiny Dutch Republic begins. An important economical factor has also been the fall of Poland, which lost Ukraine to Russia and was not able anymore to supply grain to the Netherlands.

Growth of the liberal and republican ideas all over the world and resistance to these ideas by the people who ruled the Dutch Republic, lead at the end of the 18th century to the creation of The Kingdom of the Netherlands, which after the fall of Napoleon included also the territories of the today’s Belgium and Luxemburg.

Time of peace and prosperity

In the second half of the 19 century, through slow but constant economical growth and important constitutional reforms, the Netherlands became a liberal and modern state. During the WWI, the Netherlands remained neutral.

During World War II (1939-1945), the Netherlands was invaded and occupied by the Germans (1940). After two years of relative prosperity, when only the Jewish population has been prosecuted, the whole country began to suffer the burden of war and increasing German terror.
The Dutch resisted against attempts of the Nazi Germany to incorporate Netherlands into the Third Reich during the WWII, and the leadership of the Royal Family in the struggle with the occupants, are still alive in the Dutch people memory.

After the difficult years of reconstruction directly after the WWII, the Netherlands sustained in the second half of the 20th century a continuous and fast economical growth. Today the Netherlands is one of the most developed and wealthiest countries in the world.

New Amsterdam as New York: An interesting episode of the Dutch and American history is an establishment in 1609 of an urban settlement called New Amsterdam on the island called today Manhattan, by an English explorer Henry Hudson, then in the service of the Dutch Far East Company. This first urban development has been later taken by the English and became New York. And although the Dutch took back the island and the city in 1673, they lost it again next year and New Amsterdam remained known as New York.