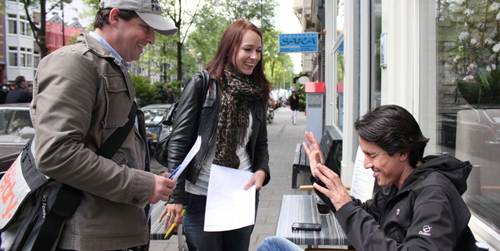 Although Amsterdam is a cosmopolitan city which is home to people from around the world and most people, including native Dutch residents, speak English as a second language, students might want to familiarise themselves with the Dutch language to feel more like insiders, either for meeting Dutch people or for getting by in everyday situations.

Nearly everyone speaks English in the big cities in the Netherlands. Furthermore, Dutch is quite difficult, with strange sounds that hurt your throat. So why should you invest your time and money in learning this complicated language?

One of the reasons why expats like living in the Netherlands, is the fact that they can communicate in English. Ask Dutch people if they speak English, and you will probably get the answer: 'a little bit'. But soon you will find out they are nearly fluent.

So it is absolutely possible to survive in the Netherlands without speaking any Dutch. But if you don't want to feel like a tourist, you should try to learn some Dutch. Don't you feel awkward when a group of Dutch people are speaking English just because of you? The Dutch will appreciate it if you try to speak the language (although they will most likely reply in English if they hear an accent). And wouldn't it be fun to understand your Dutch colleagues when they are gossiping during lunch break?

This is how Kit, a 27 year old UK citizen living in Amsterdam, puts it: Don't believe the old claim that 'learning Dutch is pointless, as everyone speaks English anyway'; if you're resident in Holland for any length of time, a Dutch course can make a serious difference to your appreciation and enjoyment of the country. I highly recommend it.

So it is worth putting some effort in learning Dutch.