The reason why three X shaped crosses Saint Andrew crosses (saltires) were chosen in the Middle Ages as symbol of Amsterdam has not been known. Today, three white or silver crosses placed vertically or horizontally, are used as the modern logo of the Amsterdam. 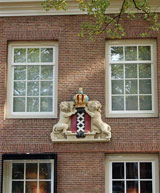 Three X shaped crosses are the symbol of Amsterdam from ca 1419. Saint Andrew has been crucified on an x shaped cross. The legend says, that Christian martyr demanded before his crucifixion, that his cross should be in some way lesser than that of Jesus. St.Andrew cross appears on many West European coat of arms of the Middle Ages.

The shield: red and black

The crosses were placed on the red-black shield. Black stripe in the middle of the shield represents the Amstel River. Red on the sides according to historian is coming from the Persijn family coat of arms, which owned the area in the 13th C.

Until today, red remains one of the favorite colors of the Dutch people (along with orange - the symbol of patriotism and the color of the Royal Family and dark green, so called Amsterdam green, widely used in Dutch architecture). 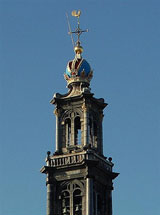 The Imperial Crown of Austria above the shield, has been added in 1498 by the Emperor Maximilian I Habsburg of Austria as a sign of gratitude for a huge loan he received from the city. The same blue crown, but without its satin red stripes, has been from 1638 topping the tower of the Westerkerk (Western Church).

One of the main canals in the Old Amsterdam Centre - Keizersgracht (Imperial canal) has been also named after Maximilian I.

Two lions and the historic words

The shield of Amsterdam is held on both sides by two lions, symbol of the Netherlands. They were added in 16th C.

After the World War II, in recognition of the heroism of people of Amsterdam, Queen Wilhelmina who led from England the Resistance of the Netherlands against the Nazi occupation, added under the Amsterdam coat of arms three words: "Heldhaftig, Vastberaden, Barmhartig" ("Heroic, Determined, Compassionate").

Although a legally registered sign, the Amsterdam Coat of arms is in public domain and therefore may be freely reproduced in all media, under the condition, that its reproduction may not suggest any approval from the city of Amsterdam.