Since 1815 The Netherlands has been a constitutional monarchy. Historically for centuries before, it had been the proud republic, a union of provinces. Since 1848, the Netherlands is also a parliamentary democracy. Dutch monarch has no real political power, but serves as representative head of state and a symbolic person uniting the divided parliamentary politics.

The parliament consists of two chambers. The Lower House (Dutch: Tweede Kamer, or Second Chamber) is elected every four years in a direct national elections together with the provincial parliaments. It consists of 150 members. Only the political parties can take part in the elections. The lower chamber approves the budget and has the right of the legal initiative, the right of submitting amendments, the right to start its own inquires and the right of interpellation. The members of the provincial parliaments vote for the less important Senate (Dutch: Eerste Kamer, or First Chamber) consisting of 75 members who approve or reject all laws of the Netherlands without the right of amendment. Together, the First and Second Chamber constitute The Estates-General (Dutch: Staten Generaal, established 1593). In fact, Dutch political system gives a lot of freedom to the government, as long as it has support of the parliament.

Head of state – The King 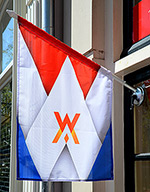 King Willem-Alexander van Oranje-Nassau is the nominal head of state of the Netherlands. The King has several mostly representative functions. He nominates all the mayors in the Netherlands as well as the politician who forms the government after the general elections. The monarch also signs all the laws approved by the parliament.

The Netherlands is usually governed by a coalition of different political parties. Prime minister is usually coming from the party, which won the most seats in the elections. Usually the King gives the leader of the party, which won the elections, or an important politician coming from this party, the task of forming the new government. The constitution does not permit to a member of the parliament to serve in the government.

Prime Minister is the head of the government. Mark Rutte from the People's Party for Freedom and Democracy – VVD (liberals) is at present the Prime Minister of the Netherlands.