Province of South-Holland, The Netherlands

Historically Holland has been a county, one of seven Dutch provinces. Holland has been ruled from The Hague – today the seat of the Dutch Parliament and the government of the whole Netherlands. Other big cities include the biggest harbor in Europe and one of the biggest in the world - Rotterdam, the old city of Delft, a university city of Leiden, an important for the Dutch history harbor city Dordrecht and Gouda, an old town renown for its cheese.

The Hague, from the 13 century an important center of the Dutch political life, is also a fine city for walks, shopping and entertaining, place full of interesting architecture old and new, proud home of one of the best art collections in the world – Het Mauritshuis. It is there that you may see famous "Anatomy Lesson of Professor Tulp" by Rembrandt and mysterious "Girl with a pearl" by Vermeer. Another important museum – Gemeentemuseum (Municipal Museum Den Haag) has a good collection of modern art including the 20th century Dutch abstract master Mondrian. 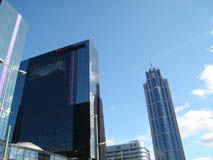 Rotterdam is a big, modern harbor city, vibrant with life and activity. Its old center has been destroyed by the indiscriminate German bombing on 14 of May 1940. On one day, 24798 homes were destroyed, 24 churches and 62 schools. Almost thousand of people died. The old center of the city has been leveled to the ground by the German bomber airplanes. Today a monumental dramatic sculpture by Osip Zadkine reminds that event.

The whole center of Rotterdam is modern, rebuilt after the WWII, but a bit impersonal, therefore not always convenient for a visitor. Still, it is a city of good restaurants, several theaters, and interesting art exhibitions. An excellent museum - Boyman’s van Beuningen Museum, featuring among other four masterpiece paintings by Hieronymus Bosch with the known "The Prodigal Son" and Pieter Brueghel's "The Tower of Babel" should not be missed. 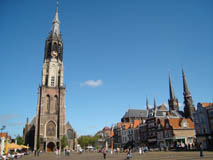 Delft is a beautiful and welcoming old city. Known for hundreds of years for its ceramics called Delftware, it has a pleasant old center, nice restaurants and a good museum – Stedelijk Museum Het Prinsenhof, a headquarters of Willem van Oranje, one of the leaders during the war against Spain in the end of 16 century. It is there where a catholic fanatic shot him dead in 1584. The hole left by the bullet can be still seen on the wall. Travel Amsterdam to Delft.

A small place called Kinderdijk not far from Rotterdam, is traditionally visited by the tourists location. Here, at the junction of two rivers - Noord and Lek, 19 imposing windmills were built, between 1738 and 1740, to keep the land around Alblasserwaard dry. Today these imposing windmills stand in a torn by wind patches of grass, as the monuments of the Dutch people industriousness in their fight with water for their land.