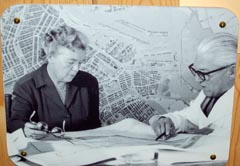 As the interests in sport and fitness grew in Europe of the 1920-ties, Amsterdam City Council decided to create a new park (1923), as a space for all kind of sports activities. A group of landscape architects started their work by visiting similar parks in England, France and Germany. The plan of the future park – Boschplan has been at the beginning the name of the park itself, it is only in 1942 that the park got its present name - Amsterdamse Bos.

The construction works started in 1934. As this was the time of economical crisis, many unemployed worked on this immense project moving manually enormous amounts of ground from the canal boats, trains and around the space using small wagons and temporary rail tracks. All together around 50 000 people worked on the project. The enthusiasm was enormous. Often clerks from the municipality, whose pay has not been very high at the time, worked at the park. 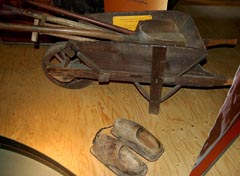 The architect of reputation Cornelis van Eesteren, former visiting professor at Bauhaus in Germany led the project. He was assisted by a young woman graduate of architecture Jacoba Mulder, who got the nickneme Mejuvrouw van het Bos (Miss of the Forest), because she gave all her life to the beloved park. Jacoba (Ko) Mulder later became one of the most important personalities in the Dutch landscape architecture and went on to design another park in Amsterdam – Beatrixpark.

200 000 trees were planted, several artificial lakes were created, 116 bridges were built over the canals in the park. Most of them (67) were designed by Pieter L. Kramer, one of the leading architects of the Amsterdamse School, who designed in Amsterdam no less than 200 bridges. Most of them are small iron or wooden bridges influenced by Japanese architecture. Almost all survived to our days and have been recently beautifully restored.

First part of the park with the Bosbaan – 2,2km long rowing lake, has been has been ready only after 3 years of works, and has been open by the Queen Wilhelmina in 1937.

During the war the works slowed down. Germans took some parts of the park for their military installations. The antiaircraft guns were put there to protect nearby Schiphol from the attacks by the Allies. The adjoining areas of Amsterdamse Bos were declared as unsafe by municipality and public could move close to these limited by the barbed wire grounds, only at their own risk. The maintenance works of the park continued also there – the municipality has been paying to its employees an additional fee for working close to the German installations.

Happily, large parts of the park remained freely accessible. As the times were hard in the Netherlands of the war time, some of the trees were cut for wood to heat the houses, and even some parts of the park were turned into fields with crops like barley and rye.

Completion of the plan 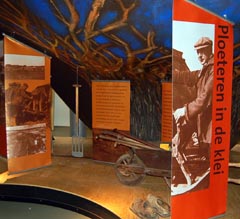 After the war and removal of unexploded bombes that fell in the park and its vicinity, the works continued to complete and improve the Amsterdamse Bos.

In 1954, the rowing lake (Bosbaan) has been widened to six lanes to host the European Rowing Championship, for the first time with women participation. The Bosbaan has been made still wider in 2001-2002 and it has now eight lanes.

It is in 1964, that the original construction plan of the park has been completed and in 1970 that a group of schoolchildren planted the last trees on the hill in the park.

The 1990-ties brought further development of the park. In October of 1999 the most recent part of the Amsterdamse Bos, called Schinkelbos has been open to the public. It has in total 173 acres (70 hectares) of surface and it is created more as a wild space than a par, giving an open view to the wetlands and water area. Wild birds came to the Schinkelbos and the variety plants, which grow there, equals the natural habitat.