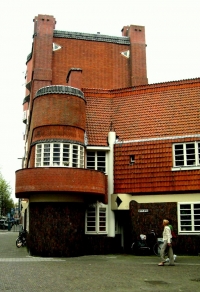 The city of Amsterdam pioneered the idea of the municipal, low cost housing for the working class. Most of the buildings were constructed in the first half of the 20th century, when a special law (Woningwet, 1901) made it possible for the municipalities and the housing cooperatives in the Netherlands, to receive the financing from the state. This law as well as later legislations, created the whole wave of public housing constructions, with its peak in the 1920's. Large parts of Amsterdam beyond the old center were built in a distinctive, original style called the Amsterdam School style of architecture (Dutch: Amsterdamse School).

The characteristics of the Amsterdam School style 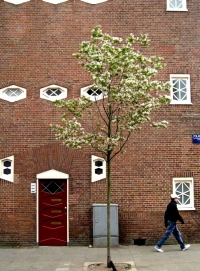 The School of Amsterdam style was largely influenced by expressionism. The buildings were often built in round and expressive forms, with towers, ornamental spires and decorative windows and doors. The walls of the Amsterdam School houses certify to the craftsmanship of its builders; constructed from many sorts of differently profiled bricks, despite its decorations remain simple and clean in their form. The usually figurative sculptures were integrated into these brick buildings. Wrought iron elements, usually painted black or very dark green (so called Amsterdam green), were used as simple decorative or functional elements. Elaborate but sober in its expression carpentry, usually painted white or again dark green, completes the buildings.

The most important architect of the Amsterdam school style was Michel de Klerk who in one apartment block called Het Schip (The Ship) established all principal aesthetical solutions of this style, developed later by architects as C. J. Blaauw, J. Crouwel, J.Gratama, P. H. Endt, P.L.Kramer, P. L. Marnette, J.M. van der Mey, J. F. Staal and H. Th. Wijdeveld. Their work, as well as their mostly socialist ideas about low cost housing and city planning, turned the School of Amsterdam into the real artistic and social movement with its own periodic publication called Wendingen ("Windings”) published until 1931. 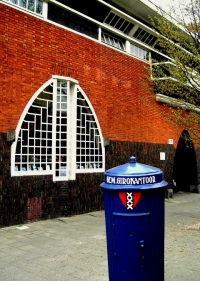 Although the biggest Dutch architect of the 20th century, Hendrik Petrus Berlage, seen today as the Father of the Modern Architecture in the Netherlands, in his work stood largely beyond the Amsterdam School, his plans for the vast expansion of Amsterdam were executed by the architects from this artistic movement.

Today, you may still observe the repercussions of this style in the Dutch architecture as much valued use of the brick wall and generally sober architecture of the low cost housing. Ironically the wonderful decorative side of the Amsterdam School was already in the thirties of the 20th century resented as excessive. The reaction was traditionalist in its form and rejecting decorations the School of Delft (Dutch: Delftse School) of the Dutch architecture of the 1930's.