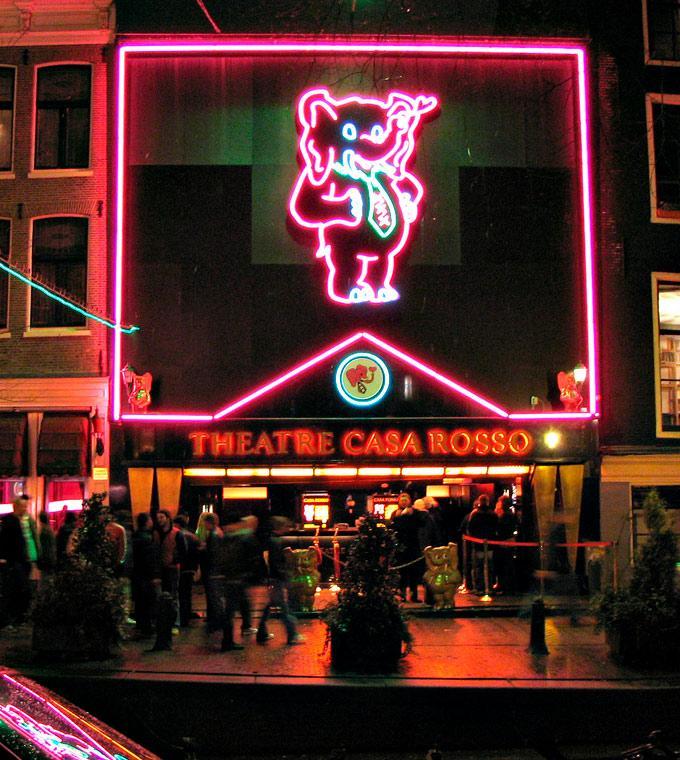 Casa Rosso is without doubt the most famous and well known of all the Amsterdam sex shows. The club can be easily found due to the large neon pink elephant adorning the front of the building in the heart of the Red Light District. Casa Rosso has strong links to the almost equally famous Banana Bar, found not far away on the same canal, but the layout here is much more of a theatre set up than the more free flowing, lounge-like Banana Bar.

You can make a reservation for a show + dinner or drinks. Check the information on the Casa Rosso reservation webpage.

Appropriate to its claims of being the oldest live sex theatre in the Amsterdam Red Light District, the venue here is larger and cleaner than for many other sex shows, with an impressive capacity of 180 seats. The room is air conditioned for those sweltering summer months, although the performers certainly aren't wearing enough to benefit, and there is a decent sized bar, which you may not need to use thanks to the attentive table service.

The atmosphere of Casa Rosso is much friendlier to women than in other sex shows, including the Banana Bar, and you will often find groups of girls or couples among the audience. The club gets a lot of business from stag and hen (bachelor and bachelorette) parties and takes bookings for groups of no less than ten, so be prepared to meet some quite large and excited groups of revellers.

The live shows available here are pretty much the same as can be found at most Amsterdam sex shows and consist of strip tease acts, with both male and female strippers, light S&M shows and various adult tricks involving props such as bananas and pens. Of course, the biggest draw is the live sex acts and these are certainly well in attendance. These acts usually consist of a man and woman performing some very well choreographed and acrobatic sex acts with each other and form the main part of the show, with single performer acts happening in between. Some acts have limited audience participation, but much less than can be found elsewhere, such as in the Moulin Rouge Amsterdam a little further along the canal.

Entrance to Casa Rosso does not come cheap, but neither is it so expensive as to make it impossible to visit. With a standard entrance ticket costing €45, it may be a hit to your wallet but can be worth it as, once inside, there are no additional costs other than the price of your drinks. This is a big difference to some shows, where shows are more personal and each lapdance or performance trick costs an extra fee. If you're worried about the mounting costs of drinks, then a combined ticket including two drinks costs €55.

This may be the most popular show the Amsterdam Red Light District has to offer, but the venue's large size means that getting in is usually not a problem. For large groups such as stag parties, booking can be a good idea but, as mentioned above, only if your group is of ten people or more.

Casa Rosso in Amsterdam on the map