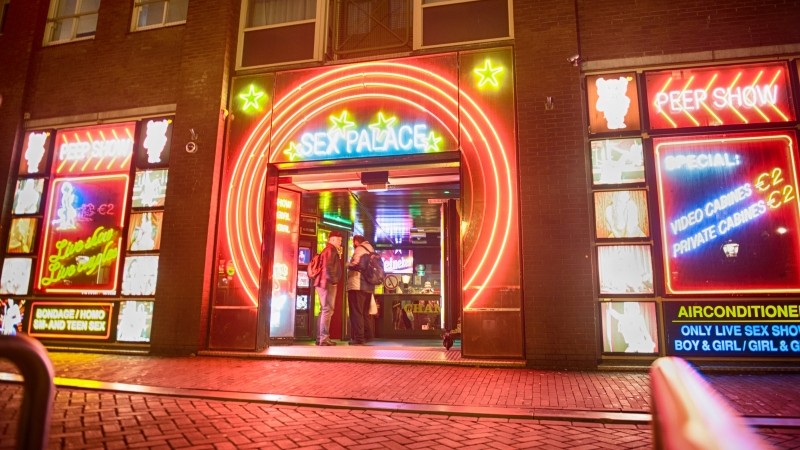 Amsterdam is known by many as the city of sin and has a reputation as a place where anything goes. Amsterdam sex clubs, brothels and strip shows are famous the world over and everybody has heard of the Amsterdam Red Light District. Between the coffeeshops and sex shops, the narrow streets are filled with girls who pose suggestively in their windows, beckoning passing tourists inside for some illicit pleasure, but there are also many other forms of sexual entertainment available throughout the city.

If interested in this topic don't forget to check our Amsterdam escorts page.

One thing to keep in mind when visiting Amsterdam sex clubs is the infamous "taxi scam", in which a club will have a deal with taxi drivers to take customers to their door even though they may not be the closest or best club nearby. It is best to know in advance where you wish to go and get a taxi to the address, or even a street or two away to avoid confrontation.

For those who may not feel like hiring a girl but still want the famous thrill of Amsterdam sex, one of the city's strip clubs or live sex shows is the way to go. In these establishments, visitors pay an entrance fee to watch stage shows ranging from stripping to girls performing tricks with ping pong balls and candles all the way to live shows where couples have sex on stage. Be sure to bring your wallet for any of these shows, as titillation in Amsterdam does not come cheap.

One of the most well known Amsterdam sex shows is the Banana Bar in the Red Light District. This bar is exactly what the name suggests and, once you have paid your entrance fee, you will find yourself surrounded by alluring hostesses bearing trays of drinks who are willing to perform various tricks, with or without bananas, for an additional payment. Nearby, the Moulin Rouge and Casa Rosso are two of the most popular live sex shows, with more of a theatre feel and less audience interaction.

For those who want to get more involved, Amsterdam sex clubs and brothels offer a chance to meet discreetly with a willing lady to engage in a little adult fun. Not to be confused with Amsterdam escorts, these clubs generally do not do business away from their premises, so you will have to go to them. In most of these clubs prices can vary depending on what you wish to do and with whom, so be sure to arrange everything with the girl of your choice beforehand.

One of the largest chains of sex clubs in the Netherlands, Jan Bik has ten businesses throughout the country. The Amsterdam branch is on the western side of the city centre, just off the busy Haarlemmerstraat. This is one of the best value Amsterdam sex clubs and here you can rent a girl and a room or just a room if you already have a partner with you. For a more high-end experience, sex club Asmara can be found further outside of town at Willem de Zwijgerlaan 70 and offers high class girls, excellent facilities and less hidden charges, although the up front price can be a little higher than elsewhere.

If you already have a partner and are looking for a way to expand your boundaries, one of the many Amsterdam swingers clubs might be for you. These clubs tend to charge entrance based on whether you are a couple, single lady or single guy and offer a place for like-minded people to come and engage in a wide variety of adult activities.

The Candyclub bills itself as the oldest swingers club in Amsterdam and can be found very close to Oosterpark, east of the city centre at Eikenweg 29. Candyclub has a more relaxed, informal attitude than many Amsterdam sex clubs and prides itself particularly on its easy to join group activities. Another very popular choice for the sexually adventurous in Amsterdam is Sameplace, west of the city centre at Nassaukade 120. This club is also very relaxed, although certain "speciality nights" may involve a particular dress code, such as the fetish nights where black leather is the way to go and the dungeon downstairs gets a lot of use. Sameplace is notable for actively refusing to participate in the "taxi scam" and it can, in fact, be difficult to get a taxi driver to bring you here.

Not all sex clubs in Amsterdam are exclusively for straight people, including the gay-friendly Sameplace swingers club mentioned above, and there are plenty of places for some paid gay fun in Amsterdam. These establishments range from gay saunas where likeminded guys can engage their desires to more formal arrangements where you can hire a professional partner.

Thermos, at Raamstraast 33, is by far the most famous and well-established gay sauna in Amsterdam. Thermos offers traditional spa and sauna facilities as well as its more adult offerings and is open day and night from midday until 8am. For more of a paid service, Boys Club 21 can be found right in the city centre at Spuistraat 21 and has a selection of professional guys as well as themed rooms to hire.