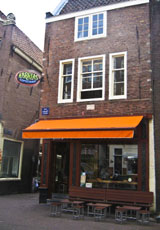 With a name steeped in ancient history and occultism, Abraxas is a coffeeshop with a definite hippy vibe. Located in a set of monumental buildings that used to serve as a restaurant and bar, Abraxas opened its doors in 1992 and has since become a key fixture in the Amsterdam coffeeshop scene.

The original Abraxas was decorated very differently to today, with graffiti-covered tables and a rougher feel. Today, the hand-crafted mosaics found decorating the walls and floors combine with warm colours and a rambling layout to give a relaxed, laid back atmosphere. Large, low couches mean that even large groups can relax around one table, centered on the huge ceramic ashtrays that form the centerpieces. Music is kept at a decent level and generally steers clear of chart hits or the pounding techno found in some Amsterdam coffeeshops, although there is often a more relaxed electronic beat. If you're planning to chill out for a while Abraxas offers internet access and board games to keep you entertained, while some outside seating allows those with a penchant for tobacco to have a smoke too. 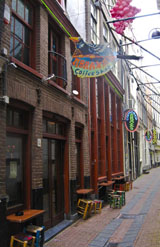 A new feature in Abraxas is its redesigned weed bar; with a backlit menu on the front there is no more need to wait for the person ahead of you to make their decision before you get a look at what's on offer. The menu gives a handy description of each type of weed or hash and its effects, although the staff will generally be happy to elaborate further if you ask. Herbal smoking mixtures are provided free of charge to replace tobacco so that you can smoke joints inside and stay within the law. Close to the weed bar is a single, carved slab of wood that serves as a beverage bar. From here you can order coffees, hot chocolates, juice etc. as well as space cakes and other treats.

For those who want to take a little bit of the Amsterdam coffeeshop scene home with them, Abraxas has its own giftshop just a few doors away from the main coffeeshop. Here you can buy hemp clothing, bags and Abraxas t-shirts as well as grinders, pipes, bongs, stash boxes, seeds and other smoking accessories.

Abraxas has two locations in Amsterdam, the original shop and the newer, smaller addition, Abraxas Too. To find the original coffeeshop simply start at Dam Square and walk behind the Royal Palace, taking a left on Nieuwezijds Voorburgwal. Easily visible should be an oval neon sign proclaiming the name Abraxas at the mouth of an alley. Abraxas Too is not far away, just northwest of the Nieuwe Kerk on Spuistraat.

Opening hours: Everyday from 10am to 1am

Abraxas Coffeeshop in Amsterdam on the map