Located not far from Central Station in the very famous shopping street Harlemmerstraat, Barneys is a pillar in Amsterdam coffee shops. Built inside a 500 years old building, Barney's not only sells good cannabis products but it is also a place where you can enjoy very good food at any time.

The place itself is full of history. Barney's has been created 23 years ago and has always been well known as a very friendly coffee shop for travelers and back packers. The deco is surprising: it recreates the atmosphere of an old apothecary.

An unusual situation, even in Amsterdam Barney’s is more than one place; the famous family of cafés and coffee shops being primarily made up of three locations all centred around the same street corner on Haarlemmerstraat: Barney’s Coffeeshop, Barney’s Farm and Barney’s Uptown. There is also a fourth location, Barney’s Lounge located in another part of the city. 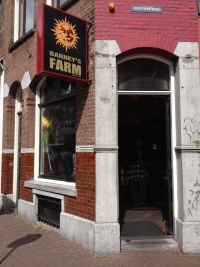 No matter which Barney’s you choose to visit, the atmosphere is lively, compared to many other Amsterdam coffee shops. The main location is usually filled with tourists in their mid-twenties drawn by the promise of some famous and award-winning strains. Barney’s Farm and Barney’s Uptown tend to draw older crowds and couples, as these are primarily cafés serving alcohol and delicious – if slightly pricey – food.

One very important thing to note is that only the main location, Barney’s Coffeeshop, is allowed to sell anything to smoke. The sister locations a few doors away serve things that an Amsterdam coffee shop is not allowed to: notably alcohol. As such, they are forbidden to sell Amsterdam’s more unique products. You may, however, bring your purchases from Barney’s Coffeeshop to any of the sister locations to enjoy. The offerings in Barney’s Coffeeshop are notably more expensive than in many other Amsterdam coffee shops, with Barney’s reputable name and long pedigree of awards for its products being the reason. 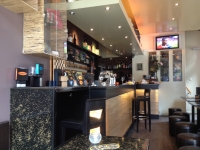 About halfway along Haarlemmerstraat, one of the more popular and interesting streets in Amsterdam, Barney’s can be found walking distance from Central Station. Simply look for the beginning of the street at the top of the Singel canal and walk until you see Barney’s Farm proudly occupying a corner on the right hand side. Barney’s Coffeeshop can be found two doors further along, while Barney’s Uptown is across the street.

From Monday to Sunday from 9am to 1am

Barney’s Café in Amsterdam on the map