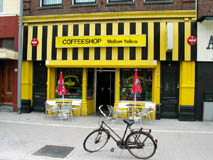 Mellow Yellow Coffeeshop has been closed due to a new law banning all coffeeshops 250m or closer to a school.

One of the first ever coffeeshops in Amsterdam, started back in 1970s. Although old and outdated, provides a feel to what has become a cannabis business.The people working here have somehow intelligently dispassionate attitude towards tourists that some may perceive as unfriendliness....

Mellow Yellow Coffeeshop in Amsterdam on the map