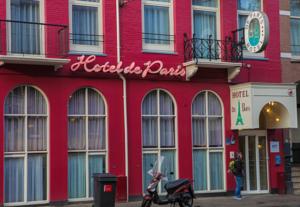 Don't be confused by the name, Hotel de Paris is not lost or confused about its location, it is simply another good quality budget hotel in Amsterdam. Fairly standard for a 3-star hotel in Amsterdam, Hotel de Paris offers a decent level of comfort at reasonable prices. One of the hotel's most notable features is its old style bar that doubles as a reception area. Sipping a drink here, perched on a bar stool, brings the old romantic image of Amsterdam to mind, and you could be forgiven for thinking you were closer to being in an early James Bond movie than on a low cost Amsterdam city break.

The other major attraction of Hotel de Paris Amsterdam is its location. Just 310 meters from Leidseplein, the hotel is in a great position for those who want to be close to Amsterdam's nightlife. Practically across the street from the hotel is the always busy Melkweg café, nightclub and venue, along with a host of smaller bars on Marnixstraat and the surrounding streets. Sightseeing from this area is easy too, Museumplein is walking distance, at just over 600 meters from the hotel, past green and leafy Vondelpark. To get to Hotel de Paris, take trams 1, 2 or 5to Leidseplein from Central Station and follow Marnixstraat between the Eden Amsterdam American hotel and the Stadsschouwburg, Hotel de Paris will be on the left hand side, just after the birdge.

A continental breakfast is served in the hotel's breakfast room between 07:30 and 10:00. Aside from vending machines serving snack, this is about the extent of the hotel's food offering. However, like many city centre hotels in Amsterdam, Hotel de Paris is surrounded by cafés and restaurants where travellers can get breakfast, lunch or dinner. The nearby Korte Leidsedwarsstraat practically heaves with great value pizzerias and steakhouses while, across the street, Eat@Jo's in Melkweg draws musicians, hipsters and the odd celebrity in for good food.

The 37 rooms in Hotel de Paris are clean and comfortable, with wooden floors and large windows to let the light in. Rooms are available in single, double, twin, triple and quad varieties. Facilities are as to be expected from a 3-star hotel in Amsterdam: private bathroom with shower, telephone, TV and safe all come as standard. Wireless Internet is available in the rooms and the hotel is non-smoking throughout.

Reception at the hotel is open 24 hours a day, a handy service for those intending to visit Amsterdam's nearby nightlife spots. This 24 hour reception area also doubles as the hotel's bar, a nice place for guests to relax before or after a trip to town. A safe can also be hired from the reception desk, if the safe provided in each room is not secure enough for you valuables. Wireless Internet is available in the bar as well as in the rooms, for a charge, and those without laptops of their own can make use of the computer located in the lobby.