Timing your visit to Amsterdam

Any time of the year may be attractive to visit Amsterdam. While summer offers pleasant weather and many tourist attractions, the city is usually very crowded with visitors. Spring and autumn are also every so often warm and very pleasant to stay outside. Climate changed in the Netherlands during the past decades and even winters are not so rainy and windy anymore. While cold the weather is usually dry and often sunny. Therefore, winter is also a good time for a visit.

Not only are airlines, hotels, and restaurants cheaper and less crowded during this time (with more relaxed and cheerful service), but there are also some very appealing events going on. For example, the bulb fields near Amsterdam are bursting with colour from mid-April to mid-May. The cultural season is in full swing between September and May along with The Hague, Rotterdam, Utrecht, and other nearby towns and cities. 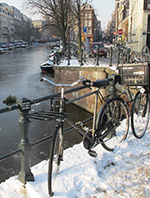 The view of the Old City covered with snow is truly unique. In addition, as the city is far less crowded with visitors in winter – there is no waiting in the long lines to the Rijksmuseum and the Anne Frank House. Amsterdam museums and tourists attractions remain open, but in winter, their opening hours are shorter. Please consult their websites for changes. There is no usual crowd in Amsterdam hotels except for the period of Christmas and the New Year, so rooms are usually less expensive and easier to book. Click for our pictures of Amsterdam in winter.

Celebrating New Year in Amsterdam is unique because of the street parties and fireworks shows, which start just before midnight and take for hours into the New Year.

While longer walks might be impossible because of the cold, you may warm up yourself in one on the city traditional cafés. All of them serve in wither a bowl of warm soup. Eat it with ‘broodje’ (Dutch: sandwich, literally: small bread), a tasty traditional sandwich made with cheese (‘broodje kaas’), ham (‘broodje ham’) or also with tomato, cucumber and salad (‘broodje gezond ‘– healthy sandwich).

If you plan to arrive to Amsterdam by car, we do not recommend using it in the city. Street parking meters are not less expensive and driving on slippery narrow canal streets among people on bicycles may be quite tricky.

Each winter, even the soft one with no freezing temperatures, there are ice skating rinks all over Amsterdam – in parks and on squares. The most popular are on the Museumplein, just behind the Rijksmuseum, open since mid-November till 1 March and on Leidseplein, open mid-November till beginning of January. You may rent skates on the spot (ID needed) and have a warm drink at the place. An entry to the rink cost typically €2.50, two hours of skates rental is typically €6, warm drinks €2.50. There is customarily a small restaurant with traditional hot pancakes nearby.
Museumplein ice skating rink website: www.iceamsterdam.nl

The professional ice skating rink in Amsterdam open to the public is called Jaap Eden Ijsbaan named after a Dutch athlete who was at the end of 19th C. multiple times speed skating and cycling world champion.
The rink is open October till March and it is located in Amsterdam Oost at Radioweg 64, 1098 NJ Amsterdam, at 30 minutes ride with the public transport from the Amsterdam centre. An entry there costs for kids €4, adults €6.60.
Website: www.jaapeden.nl