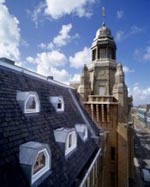 With growing importance of design in our lives and search for personalized and unique quality services in travel and dining, so called boutique hotels become increasingly popular. These small hotels propose to the Amsterdam traveler not only modern design interiors and highly personalized services, but also evoke the whole fresh lifestyle.

As in other major cities, there are a number of very distinctive, genuine boutique hotels in Amsterdam too. Some of them were inspired by the Old Dutch architecture reinventing it in a new universal way, some other by Japan and the lifestyles of the East, newly interpreted by the modern European design. Amsterdam boutique hotels are elegant, comfortable and cosmopolitan, ready to service the most distinguished travelers of different tastes and at different price ranges.

A stylish and charming modern Amsterdam boutique hotel in an old school building. Its name has a double meaning because College Hotel is being serviced by the young college students of the Amsterdam Hotel Management School. Set in an elegant area of South Amsterdam, the College Hotel is in a walking distance to the main museums in the city.

Inspired by the London minimalism style, this Amsterdam boutique hotel strives to preserve intimacy and serve the pleasure of its celebrity clients. Situated at Keizersgracht (the Emperor’s Canal) in a unique 17th century monumental building, The Dylan Amsterdam centre hotel is known for his thoughtful and hospitable service.

Previously one of many in Amsterdam, recently renovated Lloyd Hotel has been transformed into a unique Amsterdam boutique hotel. Each of its modern rooms is different, combining in its style latest Dutch design with classic elements. The rating of all rooms also varies (and so does the price), depending on their space and interior, from one to five stars. Lloyd Hotel is behind the old centre, in a walking distance to the Central station.

A modern and elegant Amsterdam boutique hotel at the most chic shopping street of Amsterdam - P.C. Hooftstraat. A lot of black wood in the decor, good beds, modern equipment in all rooms. Immaculately clean and comfortable, although sometimes strange in its interior architecture solutions. A very small hotel – only 12 rooms. Museums, Vondelpark and Leidseplein are in a short walking distance.

Often quoted as one of the best small hotels in Amsterdam, Roemer Hotel has been recently renovated giving all its rooms a touch of luxury. Based in a quiet side street (Roemer Vischerstraat) of the Vondelpark, Roemer is quiet, well serviced, modern Amsterdam boutique hotel. You may relax walking in the park or within couple of minutes walk to the Museumplein, with all important must see exhibits nearby.

A traditional guest house with eight luxurious suites named after painters and composers, based in a 19th century canal building at Prinsengracht 717 (hence the name), not far from the Leidseplein, Vondelpark and Rijksmuseum. Fully equipped, interestingly decorated rooms and an alert service are the main qualities of this Amsterdam boutique hotel.

This hotel is the essence of what Amsterdam boutique hotels should be like – it is small, modern, sharply designed and well serviced. The feel is eclectic and very Dutch - dark lavish satin and silk curtains, cushions, nice furniture and at the same time it is all modern with flat screens, WiFi and a modern espresso machines. Its service is attentive and discrete.

One of the two Amsterdam hip V-hotels, this one opened only in March of 2008. Its site is in direct proximity of the Utrechtsestraat, a good shopping and dining street. A good place for Amsterdam centre hotels. The Rijksmuseum is in a short walking distance. Fireplace in the lobby, sharply designed interiors, cool atmosphere.

Just out of the city centre a modern, small (23 rooms) Amsterdam boutique hotel servicing mostly guests to the nearby RAI congress centre (10 minutes walk). Found in an Amsterdamse School style brick building, V-hotel is amazing in its interior design. Again a fireplace in the lobby, fresh flowers and many other details certifying about the quality of its service.

A hotel located directly at the Vondelpark and not far from Leidseplein, in a small quiet street. Hotel Vondel is full of discrete luxury (it has four stars), with originally decorated, classic, fully equipped rooms and all possible modern facilities. Centrally located, yet intimate and relaxed.

Recently (2008) redecorated medium size Amsterdam boutique hotel (181 rooms), found in the centre of the city, comfortable and conveniant because of its location. Park Hotel is facing the Amsterdam Casino and is at just 5 minutes walking distance to most important museums, to Leidseplein and Vondelpark and directly behind P.C.Hooftstraat, the most elegant shopping street of Amsterdam. Good place to stay, if you intend to return repeatedly during the day to your room.

With only six rooms, Hotel Misc Eatdrinksleep is one of the most welcoming Amsterdam boutique hotels has to offer. Proprietors Pepijn & Rachel are happy to help you out with advice on tours, bicycle rental and other aspects of your stay, all in a relaxed informal manner, very different to the corporate tour advisors some larger hotels employ.

(est. 2013, 122 rooms) Their principle is to engage the visitor in the best of local culture and design. Designed by Marcel Wanders, this Amsterdam boutique hotel was rebuilt from the Amsterdam Public Library and is centrally located at the largest city canal ring - Prinsengracht.

With a rock 'n' roll theme carried on throughout the hotel, the atmosphere is like being backstage at a venue. As with all Leidseplein hotels, the Backstage is right in the centre of Amsterdam's nightlife; music lovers will be near popular venues Melkweg and Paradiso, as well as Bourbon Street blues club.

The Hoxton is a hotel created in one of the most beautiful locations in the Old City centre. Established in historical 17th and 19th century townhouses, this is a boutique hotel of excellent reputation.