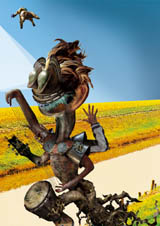 Each summer, the Amsterdam Roots Festival presents a wide range of global music and non-western culture. For over 7 days in June, the audience is offered a selection of performances, masterclasses and special projects at four different locations - Oosterpark. Extra locations for this year are Paradiso, De Balie and the Stadsschouwburg.

Traditionally, the festival opens on Sunday with the free of charge ROOTS OPEN AIR, which attracted 50.000(!) visitors in 2004. Five different stages offer a mix of music and productions, which represent different ethnic backgrounds, influences and styles from all over the world. The various stages each have their own programme, which is arranged around themes:

Rootsfestival 2005 takes place on 18-26 June, with the Roots Open Air on Sunday the 19th in the Oosterpark. The full program will be announced end of April, check their website for more info and to subscribe to their newsletter: www.amsterdamroots.nl