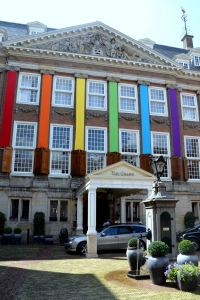 In a Renaissance city of Amsterdam several luxury hotels are located in the historical buildings like Sofitel Legend The Grand which was established in a historical Dutch Admiralty building and later served as the City Hall. It is here that the former Dutch Queen Beatrix married a German Prince Claus Felix von Amsberg in 1966. Another top property The Pulitzer Hotel grew over the years gradually adapting numerous 17 and 18 Century canal houses into the one luxury hotel. Today The Pulitzer is situated in 25 historical townhouses. The five star Grand Hotel Amrâth is located in a beautiful Art Nouveau building constructed a century ago as the Scheepvaarthuis (Dutch: ‘House of Shipping’), ship lenders offices of the six major Dutch shipping companies. While all these hotels create new tradition in the historical structures, there are also several historical hotels which are legendary through their location and their service. Iconic NH Grand Hotel Krasnapolsky is a 19th Century luxurious historical hotel constructed in 1883 at the Dam square, a true institution in Amsterdam history. Five star Hotel de L’Europe established in 1893 on the location dating to the 14 C. is another historical institution which through its location at the Amstel River and more than a hundred years long exemplary service offers you not only a luxurious stay, but also a truly romantic experience.

(est. 1970, 230 rooms) A unique hotel comprised of 25 17th and 18th century restored Amsterdam canal houses. Historical atmosphere, with some of the rooms relatively small by modern standards, with the most modern facilities. Very good service, an informal Amsterdam centre hotel.

(est. 2012; 177 rooms) This truly luxurious hotel located in the old centre of Amsterdam is also one of the newest. It has been rebuilt from an important historical building, with part of it dating originally at 1411, but only last years transformed into the hotel with a terrace and interior garden, excellent restaurant, flower shop and many more amenities. Today the Sofitel Legend The Grand Amsterdam is one of the best hotels in Amsterdam. 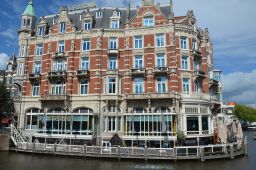 (est. 1893, 111 rooms and suites) This five star historical hotel was established more than century ago. Since then, it was many times rebuilt and modernised so while its atmosphere remained classic, its service is always up to date. Luxurious and unique Hotel de L’Europe hosts also an excellent two Michelin stars restaurant and a bar “Freddy” named after the famous Heineken brewery owner, the late Freddy Heineken. De L’Europe, a truly Amsterdam institution, is located in the Old Town in front of the Munt tower, at the spot where the River Amstel turns and flows wide as if to make better views from the hotel’s rooms overlooking water.