The Dutch National Opera and Ballet in Amsterdam (previously Muziektheater) 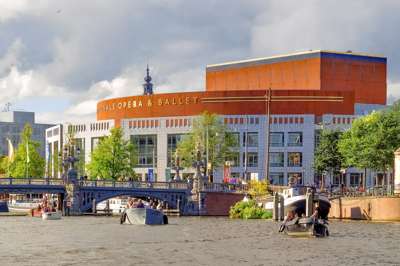 History of National Opera and Ballet

The idea of building a complex that would house an opera and a city hall first came up in 1915. It took long for the plan to materialize, but in 1981 the City Council finally took the decision to go forward with the project calling it the Stopera. The Dutch architect Cees Dam was appointed to build the building in collaboration with an Austrian Wilhelm Holzbauer, who was responsible for the city hall. The Stopera celebrated its official opening in 1986 and the City Council moved to the new city hall in 1988. The opera part of the building, previously called The Muziektheater, is called now The National Opera and Ballet. Do not confuse it with the Muziekgebouw - the music building (full name Muziekgebouw aan ’t IJ) - Amsterdam modern waterfront contemporary music concert hall nearby the Central Station.

Architecture of the Stopera

The architects of the music theater were confronted with a major challenge: how to integrate the building plans of the opera and the city hall into one design? On the ground floor can be seen how they succeeded in tackling this difficulty. The city hall is functionally and spatially merging with the opera and covered streets incorporate the building harmoniously into the life of the old city center. One of the most beautiful features of the building is the 14 meter white curved façade, facing the river Amstel.

Since its establishment in 1964 the Dutch National Opera (Nederlandse Ntionale Opera) has a reputation for daring productions. The Dutch Opera stages a lot of modern operas and new, innovative productions of the standard classical repertoire. They performed operas as varied as Verdi’s “Il Trovatore”, Humperdinck’s “Hänsel und Gretel” and “Adam in Ballingschap” from the contemporary Dutch composer Rob Zuidam.The company is led by Pierre Audi who is artistic director since 1988.

The Ballet Orchestra (Het Balletorkest, previously called Holland Symfonia) accompanies the Dutch National Opera and Ballet in Amsterdam and plays symphonic concerts at the Concert Hall in Haarlem. The orchestra is also involved in educational projects. With its segmented programming it targets specific audiences. Programs include the traditional symphonic repertoire but also avant-garde and family concerts. The orchestra is led by Matthew Rowe'.

If you cannot make it to the opera on the day of your booking, there is an online exchange service of the Dutch National Opera & Ballet which lists the tickets that are available to exchange or sell.

Opening hours of the venue