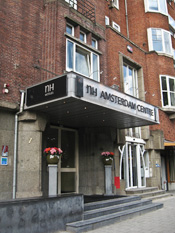 This large grey box of a building might not look very welcoming from the outside, but inside the NH Amsterdam Centre is one of the top 4 star hotels in Amsterdam. Dark wood panelling and cream furnishing feature throughout the hotel, from the sleek, understated lobby to the rooms themselves, giving the hotel a relaxing, muted feel that many welcome this close to the busy city centre. The hotel's facilities, as well as its central location, makes the NH Amsterdam Centre a popular choice for business travellers or those who wish to be close to the major Amsterdam museums and designer shopping streets.

As the name might suggest, the NH Amsterdam Centre is one of the more central hotels in Amsterdam, looking out over the bustling Leidseplein nightlife area with its bars and restaurants, while still being removed enough to maintain a relaxed atmosphere. To get there, simply hop on Tram 1 from Central Station to Stadhouderskade, the tram stop that is literally in front of the hotel's door. Those driving to Amsterdam can make use of either the Museumplein or Byzantium multi-story car parks that can both be found a short distance away. Another simple option is to get the Connexxion Airport Shuttle Bus directly from Schiphol airport, although it is essential to book this in advance.

The hotel features 230 rooms in total as well as two suites, almost guaranteeing available Amsterdam accommodation, particularly during non-peak times. All rooms come with hardwood floors and the same dark wood and cream interiors as the hotel's public areas. Ensuite bathroom facilities, a safe, mini bar, telephone, cable TV, ironing facilities and equipment for brewing tea or coffee all come as standard with the rooms. Superior rooms are slightly larger and contain a seating area with a sofa to relax on. The hotel's two suites are located at the top floor for an impressive view of Amsterdam, the suites also feature a separate seating area, a Jacuzzi and nespresso coffee machine in addition to the feature listed above.

The typical services expected in all 4-star Amsterdam hotels can be found here, including WiFi throughout the hotel, 24-hour reception and room service, safety deposit boxes and baggage storage, currency exchange and a wake-up service. NH Amsterdam Centre is also proud of its wellness and fitness centres, offering personal trainers, a solarium, sauna and Turkish baths as well as a massage service to help you unwind. For business travellers, the hotel's four connecting meeting rooms and six boardrooms make it easy to combine work and relaxation.