Museum of Prostitution in Amsterdam 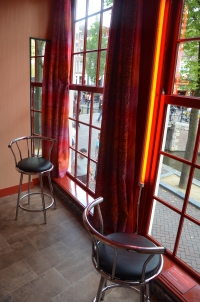 The street in Old Amsterdam which was the area of religious cloisters with 16 still open in 1578, when the Protestants removed the Catholic city government, became through ages the area of entertainment for sailors and travellers, with omnipresent nightlife, drinking bars, taverns and prostitution. Since 2006 the Amsterdam municipality fearing that exploitation of women and organised crime thrive in this part of the city, has made an effort to change the character of the area, by limiting prostitution, supporting unions of sex workers and introducing new decent businesses into the Red Light District. The recently opened Museum of Prostitution or also called Red Light Secrets exhibit attempts to preserve the atmosphere of the Red Light District from the previous decades.

The visit to the museum begins with projection of the documentary about the Red Light District, a bit chaotic film, exploiting unhealthy excitement about the subject of the sex workers. Next you will be able to walk through the interiors in which sex workers work. If any questions remain unanswered, there are a few computer stands answering typical questions. Probably the most interesting is the possibility to sit in the window and watch the crowd walking by, the way the prostitutes see it. 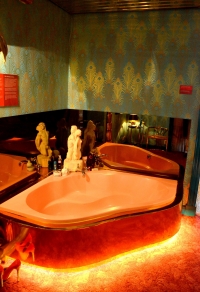 A tourist attraction for people who are very interested in the subject, but because of moral reasons would never pay a visit to a Red Light District worker. Do not expect too much from this exhibit, it all looks more or less like you could have imagined - several realistically recreated interiors, arranged in a truly unique characteristic for these walks of life bad taste. In this intelligent show you might feel the smell of exploitation on both sides, sex worker and a client. For curious adults only.

How to get to Museum of Prostitution

Only walking, as the museum is located in the very middle of the crowded and inaccessible by and mean of communication Red Light District. Do not confuse the name of the street in the museum’s address: Oudezijds Achterburgwal (Old Side Behind the Wall), for short OZ Achteburgwal is one of the oldest Amsterdam street. Similar name Oudezijds Voorburgwal is a nearby street parallel to it, but its name indicates that it was led in front of the Medieval Old Amsterdam City defensive walls constructed in 1385, today not existing.
Museum of Prostitution is located within 10 minutes walk from the Central Station and 5 minutes walk from the Dam square.

Museum of Prostitution in Amsterdam on the map