Walking through the city, you will meet street performers focused on tourists, on the two most busy city squares – Dam square and Leidseplein. However this is the least interesting side of the street artistic activity in Amsterdam, as the city flows with new and free artistic movements. Next to expressions of original street fashion, graffiti’s and all forms of street art – unofficial and alternative, Amsterdam has numerous interesting pieces of art standing in the street. These are not only official monuments to famous people or memorials of important historical events, but often simply the pieces of modern art, addressing the city street crowd. 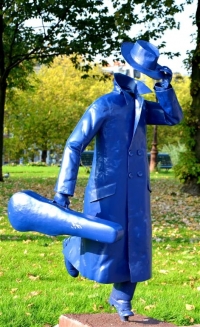 Amsterdam has hundreds of monuments and street sculptures. Like in any other modern city, numerous new street sculptures are putting an accent on unofficial, playful, experimenting. Together with old, traditional monuments often commemorating past kings and heroes, these habitually modest art pieces create a unique atmosphere of this city.

The Dutch have always been great music lovers and in Amsterdam there is a centuries long tradition of street musicians. You may meet them on the Spui square, on the Museumplein, and on canals near the Old City centre. Often the music schools students play pieces of classical music in the streets, sometimes on a very high musical level. The percussion instruments have been forbidden by the municipality and the law allows for concerts not longer than 30 minutes. It is the traditional custom that on Queensday small children play on instruments. Do not expect too much from them melodically – they still have time to learn and their ineptness is above all charming.

Like centuries ago, there are still people who perform as actors in small theatre acts on Amsterdam street and squares. Fighting for their rights, they even established their own Street Theatre Union (SAS). In summer, these small theatre companies perform mostly for children. In 2010 Amsterdam municipality gave street performers the permission to use electric sound amplifiers “within certain limits”.
www.straattheater.info

In today’s era of omnipresence of all kind of media, the fashion industry influences, what ordinary people wear. New collections make news not only on television, but are also shown on street monitors and in shops. Conversely, the fashion industry is strongly influenced by the way young people dress. Amsterdam crowd is full of unusually dressed people. Two times a year Amsterdam Fashion Week puts a spotlight on the street wear trends. 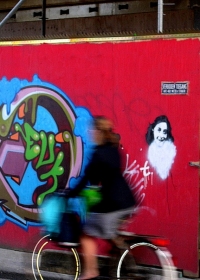 While graffiti is often perceived as vandalism and penalised by the law, in Amsterdam there were many attempts by the municipality to reach out to the graffiti artists. Commissions have been given to the most known graffiti artists, galleries began trading in graffiti art, some pieces were purchased by the modern art collections. Graffiti’s are often painted on temporary construction fences, so this scene changes every day.

Artistic events which came to the streets of the world’s big cities after graffiti, are now called shortly “street art”. This artistic stream includes not only painting techniques close to graffiti as stencilling and wood blocking, but also all kind of artistic performances and protest art activism. Amsterdam is one of the favourite big cities for the so called street workers. Some of the new galleries as ArTicks, are specialized in underground street art.