The Hash, Marijuana and Hemp Museum in Amsterdam 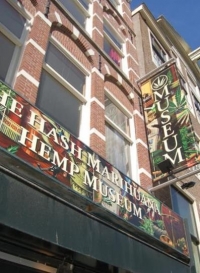 These are in fact two small museums, for the price of one. Both are located in a short walking distance one from another at Oudezijds Achterburgwal, one of the canals of the Red Light District.

First exhibit, called the Museum covers different uses of the hemp plant and some of its varieties used for recreational purposes and usually called cannabis. The hemp plant is one of the oldest crops known to man, which has been used for thousands of years as a material to make textiles (similar to linen), ropes and even paper. Hemp has been also a source of oil – which while eatable, has been produced mainly to impregnate textiles, as a fuel for oil lamps, as a medicine and to make paints and soap. Today, the hemp plant is seen as an important alternative of cotton, but while cultivation of cotton asks for a lot of water and pesticides and its harvest is labor consuming, the hemp plant is a strong, undemanding, versatile crop, harvesting of which may be easily mechanized.

Second exhibit called Hemp Gallery, puts an accent on civilized use of cannabis, its history and tradition in arts, again repeating the arguments for the wider use of hemp. A small art gallery where individual shows of painters and photographers take place, is located at the back of the exhibit.

Both museums are interesting and instructive. Especially The Hemp Gallery presents a unique, individual in its selection, exhibit of artifacts worth seeing, not only if you are interested in tradition of recreational and medical use of cannabis, but also in history and social questions surrounding the use of the hemp plant.

Adult visitors may feel the effects of vapors of one of the five different marijuana plants cultivated at the museum, in the special vaporizing room located on the premises.

How to get to Marijuana Museum

The Hash, Marijuana and Hemp Museum is located at 5 minutes walk from the Dam square.

It is almost impossible to get to the museum with the car. We advise you to leave your car at the Bijenkorf department store parking garage, and walk to the museum.

The Hash, Marijuana and Hemp Museum in Amsterdam on the map