The Royal Family of Orange reigning now in the Netherlands, takes its roots in the 13th century, with its importance growing in the 16th century, when William I of Orange ((1533-1584), also known as "William the Silent" or "Father of the Fatherland", led the resistance against the Spanish rule. After the prolonged war, The Netherlands remained a proud of its independence republic, while the House of Orange maintained a leading role in the country political life. It is only after a disturbing period of the French Revolution and Napoleonic wars, which followed, that the constitutional monarchy was introduced in the Netherlands.
Modern tradition of the WWII and the resistance against the occupation by Nazi Germany, renewed the strong historical bond between Dutch patriotism and the Oranje Family.

Color of Orange in the Netherlands

The name Orange takes its roots from the French Princedom of Orange, named after the town Orange in the South of France. The King’s title is a result of marriage in 1515 between Hendrik III of Nassau-Breda and Claudia of Châlon-Orange from French Burgundy. The dynasty had been established, when their son adopted the title of Orange-Nassau. Today orange is the traditional color of the Dutch monarchy, the symbol of unity and solidarity of the nation, as well as beloved color of the whole country. You may well see it observing a crowd of supporters of the Dutch football team. 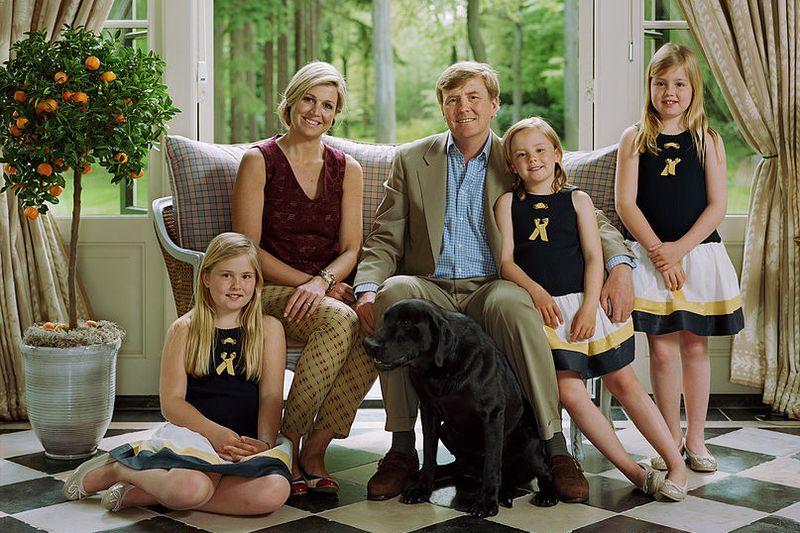 King Willem-Alexander married in 2002 Argentinean born Maxima who as the King’s wife bears now the title of the Queen. Willem-Alexander and Maxima have three daughters – Catharina-Amalia, Alexia and Ariane.

Residences of the Dutch royal family

The King Willem-Alexander uses two residences in The Hague - The Noordeinde Palace and Villa Eikenhorst in Wassenaar. Official residences also include Huis ten Bosch (English: House in the Woods) palace in The Hague as well as the Royal Palace on the Dam square in Amsterdam. All these palaces are owned by the Dutch State. The Noordeinde Palace in the center of town is a place where King’s offices are located, while Villa Eikenhorst in Wassenaar is his residence. The palace on the Dam square in Amsterdam has largely a ceremonial role. It is here that the King often receives the official guests. Every now and then, it is possible to visit this palace.

After her abdication on April 30, 2013, Her Royal Highness Queen Beatrix adopted the title of Princess of the Netherlands, Princess of Orange-Nassau and Princess of Lippe-Biesterfeld. Princess Beatrix took up the residence at Drakensteyn Castle in Lage Vuursche, while often staying at Huis ten Bosch in the Hague.

An interesting residence, which serves today as the museum is Het Loo Palace in Apeldoorn. It is here, that a relatively modest residence of the former Queen’s younger sister Princess Margriet and her husband, Pieter van Vollenhoven is located. The Het Loo Palace and its beautiful park are today open to the public. Princess Margriet was born during the WWII in 1943, in Canada. The Ottawa Civic Hospital where Queen Juliana gave birth was declared temporarily a Dutch territory, not to make a newborn princess a British subject. Dutch Royal Family was at the time on exile in Canada, because of the German occupation of the Netherlands.

Birthday of the King - King’s Day

Dutch people have feelings of love and admiration towards their Royals. Every year on April 27, on the day of the King‘s Willem-Alexander birthday, a festive, carnival-like King’s Day (Dutch: Koningsdag, formerly under the reign of the Queen Beatrix called Queen’s Day) is celebrated all over the country.

If the date of May 27 falls on Sunday, the King’s day is celebrated a day earlier - on Saturday 26th.