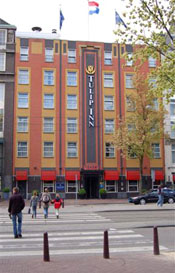 This modern, medium size hotel, previously known as Tulip Inn, has an ambition to serve business travelers, although its central location, makes it also a worthy pick for tourists, especially those who arrive to Amsterdam by train.

Westcord Amsterdam Centre is a modern no nonsense hotel, with lift, air-conditioned lobby and lounge, flat screen TV sets in all rooms, fast Internet and modern showers. And while Westcord rooms are - as we would prefer to put it – compact, with even smaller bathrooms, comparing to Amsterdam hotels adapted from old townhouses and built sometimes centuries ago, Westcord Amsterdam Centre will often offer you more comfort.

Located in a busy street just behind the main commercial walkway of Amsterdam – Nieuwendijk/Kalverstraat, the Westcord Centre Hotel is just ten minutes walking distance from the Central Station and another five minutes from Dam square, three minutes from Magna Plaza, fifteen minutes walk from Anne Frank House. Red Light District is also nearby, but the hotel is far enough, to insulate you from this night life area of the city. 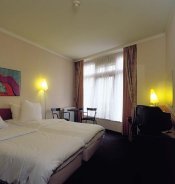 The hotel has no restaurant, but there are plenty of dinning possibilities in the area. The breakfast is served in the hotel’s café Piazza d’Oro, which is serving drinks also later in the day.

A modest downtown hotel - simple and a bit dull, but with some modern lines and colors in its interior. Its central location, with the underground car park “De Kolk” in front, Old Town centre, Red Light district and Central Station nearby, is the hotel’s main asset. Another one is its service – reliable, professional, friendly.