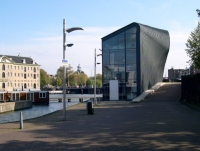 In the 1970-ties, the Dutch were very unhappy about their modern architecture and a lot has been done to change it. Today the contemporary Dutch architecture is one of the most interesting in the world. In 1986 a foundation has been established as an information centre for the new and old architecture of Amsterdam. Its activities are directed at the larger public, with the aim to get people involved in the development of Amsterdam and its architecture. ARCAM works also with architects and institutions influencing the city architecture. Especially young architects, who will eventually shape the future of Amsterdam urbanism, are the ARCAM target public.

ARCAM organizes each year five different exhibitions, which from one side concentrate on the new developments in architecture - also abroad, on the other, on the history of Amsterdam architecture. The ARCAM panorama shows on one not a very big wall, an overview of the city architecture throughout last 1200 years of its extended history – from the landscape to the modern city.

ARCAM is located in a small aluminum pavilion by an architect René van Zuuk, completed in the autumn of 2003. Built in a very traditional way, during six years adaptation from a temporary Nemo Museum building, the ARCAM small, three storeys structure looks experimental. Perfectly executed until the minor details building, is worth seeing on its own. It combines simplicity and function with an interesting form. 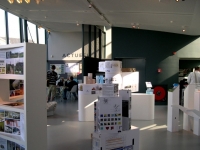 In a beautiful, visually clean and original building, you may find an interesting, small exhibition - about the modern architecture or architecture of the past in the relation to the present time. A real must see for the people interested in the subject.

Tuesday to Saturday, from 1 p.m. to 5 p.m.
Exhibition space is closed during short periods between the shows.
ARCAM information point and its library remain open.

Entry is free.
ARCAM has been adapted throughout the whole building to receive handicapped visitors.

ARCAM - Amsterdam Centre for Architecture on the map