The game of chess is very popular in the Netherlands and its enthusiasts in Amsterdam have their center close to most lively square in the city – the Leidseplein. Along with chess hall, library and an office, a small museum tells the history of chess and the history of life of the Dutchman Max Euwe, the fifth World Chess Champion.

Former prison, with a sinister history dating from the period of the World War II, when the Nazis tortured here members of the Dutch resistance, has been transformed into an office building. You may still recognize the prison’s characteristic prison’s windows and its thick walls. The prison’s yard is today a lively square Max Euwe Plein with a nice, small monument of Euwe and the big chess board to play live chess outside.

A remembrance plaque on the wall of the building with the sculpture of the two big symbolic tears, memorizes the sufferings of the prisoners.

The history of chess as well as history of life of Max Euwe (1901-1981), who was the World Chess Champion in the years 1935-1937, after defeating famous Russian master Alexander Alekhine, are documented through photographs and copies of documents. A collection of chess sets is also on show. 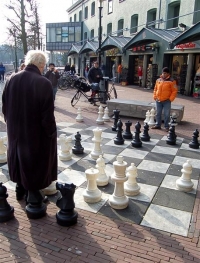 Next to the museum, there is a library with big collection of chess books. Museum employees are chess enthusiasts, they are willing to guide you through at no charge, also in English. An attraction: you may play chess against the computer here or meet other chess players for a live chess game outside, or a quieter one in the center.

While certainly really interesting for the chess fanatics, the museum exhibit does not move beyond photographic documentation of its theme. A show has been carefully presented, nevertheless with only a few unique objects or memorabilia.

Walking: from Leidseplein in direction of Cultural Center De Balie – 3 minutes, the museum is located on the first floor of the right wing of the building.
By tram: from Central Station by 1, 2 or 5, bus 142, 170, 171, 172 (exit on Leidseplein stop); from other parts of the city: tram 7, 10.
By car: from the A10 ring take an exit S108 Oud Zuid and drive direction Rijksmuseum; park your car in the Parking Byzantium (close to Leidseplein: Tesselschadestraat 1G) or under the Museumplein (Van Baerlestraat 33B).

Chess Museum in Amsterdam on the map