In a modest patrician house at one of the small streets of Old Amsterdam centre, there is a museum dedicated to one of the most celebrated Dutch writers. Eduard Douwes Dekker, who took the penname Multatuli, was born here in 1820 as the fourth child of the Dutch ship captain. After him one more son was born in the family, so they had to move to a bogger lodging. Multatuli’s upbringing although patricians, was very modest, with father mostly at sea and mother taking care of children.

Since 1910, the society to memorize Multatuli was established and took as one of its aims collecting manuscripts and objects linked to the writers past. At first this collection has been stored at the University Library of Amsterdam and since 1957, while manuscripts remained there, all objects and books were moved to the newly established Multatuli Museum, in the house of his birth. Actually, the writer’s family had only one floor of the small house at Korsjespoortsteeg, while today the museum has two. The museum reminds its visitor writer’s times, his life and his writings.

A small and very modest museum. The entry is free so there is no talk about any disappointment, on the contrary - through its simplicity Multatuli Museum says a lot about the writer’s life. Since his childhood it was humble and full of difficulties. At the same time Multatuli travels and especially his writings extraordinarily progressive for his era, reverberate in these few modest rooms. Multatuli defended in his most known novel “Max Havelaar” colonized people of the Dutch East Indies, at the times when the idea of equality of human races has been hardly ever popular. 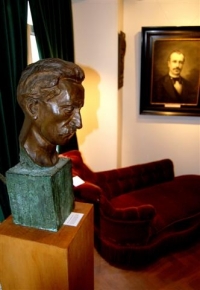 If you are interested in history, especially the history of the Netherlands, this museum will be a small, but intelligent addition.

The admission is free.
Guided tour by the Museum’s curator Jos van Waterschoot is € 3,50 (minimum 5 participants).
Museum sells books by and school materials about Multatuli.

Walking: You will find the Multatuli Museum in Korsjespoortsteeg, a small street between Singel and Herengracht, close to Brouwersgracht, not far form the Central Station (10 minutes walk).
By tram: from the Central Station: lines 1, 2, 5, 13, 17; step out on the first stop (Nieuwezijds Kolk). Arriving form other parts of the city use the Go/Stop bus and exit near the Brouwersgracht and walk 5 minutes.

Multatuli Museum in Amsterdam on the map