The Reconstruction of Rijksmuseum

Two Spanish architects - Antonio Cruz Villalón (born 1948) en Antonio Ortiz García (born 1947) who worked together since 1971 forming architecture firm Cruz y Ortiz, were chosen by the Dutch authorities to lead the reconstruction of the Rijksmuseum for the century ahead. Spanish architects previously designed apartment buildings on the Amsterdam Java Island and received several awards for their work. 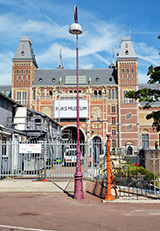 The main value of the Cruz y Ortiz project was the decision to keep the old building intact, locating many of the modern museum service areas deeper under the old structure. The historical building designed by the Dutch architect Pierre Cypers (1827 - 1921) originally opened in 1885, had the so-called Museumpoort – centrally located gates from the both sides of the building and the street passage between them leading from the Amsterdam Old City center to then new South area of town - Zuid Amsterdam. Cruz y Ortiz project planned to close this passage creating an interesting new space, future reception area of the museum, accessible from both sides of the building. 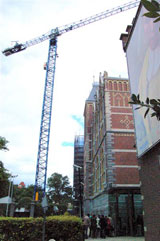 The new 9000 m2 of surface Atelier Building of the Rijksmuseum also designed by Cruz y Ortiz, was completed in 2007. This new building is not connected with the original Cuypers Rijksmuseum building. It has been built at the Hobbemakade - a side canal street behind the museum. It accommodates museum conservation services, liberating more exhibition space in the main building.

The difficulties of the renovation

The reconstruction of the Rijksmuseum took 10 years and went several times over budget. While the original cost was estimated at 272 million euro, finally the total cost amounted to 375 million euro, which is almost half billion US dollars (ca. $ 487 M.). Several factors contributed to this staggering cost. Construction companies, which went bankrupt, original construction plans, which have changed several times, and the red tape delays were to blame.

Museum in conflict with the Cyclists’ Union 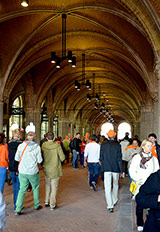 In the original reconstruction plans, the street passage under the Cuypers building had to be closed and included in the building’s volume. Amsterdam Cyclists' Union (Fietsersbond Amsterdam) went to court to preserve this shortest passage from the Old City center to the South. Important Dutch personalities all of them themselves using the bicycle every day, supported this struggle. Finally, the Cyclists' Union of Amsterdam won the court procedure and the Amsterdam City Council voted that the passage street has to remain open to the bicycle users. Initially Spanish architects, who most likely rode the bicycle only as kids, planned only a narrow tunnel under the museum – just a passage for the cyclists both ways. The idea was soon seen as unsafe, construction plans had to be reworked again and the whole Museumpoort street passage is today open for the bicycle users and pedestrians. 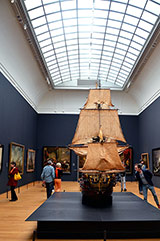 Every nation endeavors to present its heritage in the best possible way. The Dutch live with a deep respect for their past and their most important museums, most of them recently painstakingly renovated, express this emotion. The Rijksmuseum in its new presentation designed by Jean-Michel Wilmotte presents famous Dutch paintings in the context of the life of the time through exhibiting sculptures, objects, pieces of crafts from the epoch, ship models and even pieces of furniture. This way of showing the artifactes applied in a setting of the beautifully restored historical 19th C. building, with several of its original interior architecture elements recovered and restored, with perfect light and color choosing of the museum’s walls, the masterpieces of the Rijksmuseum are the real joy to see.

It has been one of the Queen Beatrix last official tasks before succeeding the throne to her oldest son King Willem-Alexander, to reopen the Rijksmuseum on April 13, 2013. On that day, the museum stayed opened free until midnight to all visitors. On the eve of coronation of the new King on April 30, 2013, the Queen decided to hold her farewell reception not in one of her official palaces, but just at the Rijksmuseum. This way the historical presentation of the museum served as the background to the new historical events of the nation.