Advertised as ‘bringing to life 500 years of the Dutch dark history’, the Amsterdam Dungeon attraction is a horror theater show. Walking through the Dungeon, you get to see short performances accompanied by sound, smell and light effects. Most of the show happens in almost complete darkness, with actors barely visible, so the main attraction is the thrill of the unknown, terrifying and old fashioned. Historical scenes like the Mediaeval torture, the Plague, Rembrandt workshop with the human corps vivisection or a journey on a Dutch 17th C. Far East Company sailing ship are arranged with just a few dusty elements. The main attraction is bilingual (English and Dutch) live acting and a few distinct horror show attractions as the mirror hall labyrinth or the fall ride into the darkness. 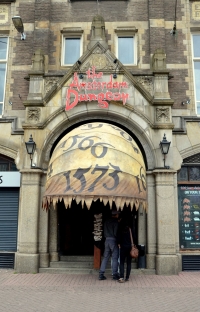 The Amsterdam Dungeon attraction has been built in 2006, at the cost of 7,5 million euro inside a historical church, still owned by the Dutch Reformed Church and leased by the UK firm Merlin Entertainment, which specializes in attractions like Madame Tussauds Wax Museums and Legoland Parks.

Neo-gothic elements of the church architecture, dating from 1912 are still visible in some scenes of the show. Ironically, the church has been built on the spot where famous, recognized by Vatican Eucharistic Miracle of Amsterdam took place in 1345. To memorize this event, each year in the evening of March 15, the Catholic Silent Procession (Dutch: Stille Omgang) walks through the streets of Amsterdam.

The original 14th C. chapel built on a place of the miracle, stood until 1908, but its protestant owners, have put it down and built in 1912 much bigger church. During the Dungeon adaptation, several archeological discoveries were made and it is for example known, that graves of 200 people buried in the chapel centuries ago, remained under the church’s floor.

This is a popular site to visit. You can buy your Amsterdam Dungeon tickets online. 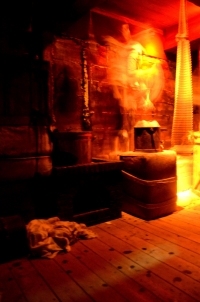 Thought out in the tradition of the classic ‘Pirates’ ride at Disneyland, the Amsterdam Dungeon was located in the very center of the city, in a very limited space for its show. Today, in the era of the 3D cinema, laser shows and computer generated effects the Dungeon theater show seems modest, almost home made. Nevertheless, we recommend it for older children and teenagers. The Dungeon’s professional actors are the main attraction. They are kind torturers; their work is marked by enthusiasm and black humor. If you are young, visiting Amsterdam Dungeon in a group of friends, you should have a good time.

The Amsterdam dungeon attraction is open daily from 11am - 6pm.

The tour lasts for about 1 hour and 20 minutes.

Photographs and video are not allowed. 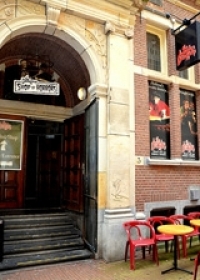 The Dungeon is accessible to handicapped on wheelchairs with the limit of one person on a wheelchair in a group of visitors. Electric wheelchairs are not allowed because of safety precautions.

The Dungeon may organize birthday parties for kids. On some days, this possibility has been excluded. If interested, please contact the Dungeon.

The Amsterdam Dungeon has a freely accessible Shop of Horrors with thrilling gadgets and memorabilia.

How to get to Amsterdam Dungeon

walking: from the Dam square – 5 minutes
by public transport: from Central Station tram 4, 9, 16, 24, 25 – stop Rokin, from the city tram 14 – stop Rokin
By car: from the Amsterdam ring A10 take an exit S110, follow the signs ‘Centrum’ and ‘Stadhouderskade’ and take left via Weteringlaan direction Vijzelgracht and Vijzelstraat; park your car in a side canal street before reaching the Muntplein (metered parking), or drive along Rokin to the Dam square and another 100 meters further direction Central Station: the Bijenkorf car park, located on the right behind the department store (Dam 1; 5 minutes walk).

The Amsterdam Dungeon on the map