Leidseplein is one of the majors centres of Amsterdam nightlife and, on any night, throngs of young people can be seen coming and going from the many bars, clubs and pubs around the square. Opening hours in Amsterdam are usually until 3am on the weekend, but many Leidseplein clubs such as Paradiso and Melkweg stay open until 5am for late night revellers. 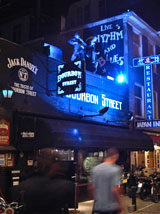 For pre-club drinks or just a night of hanging out with friends over beers and cocktails, there are a large number of Leidseplein bars worth a visit. Those in the mood for a pint might check out the large and sprawling Hoopman Irish bar, which lays claim to much of Leidseplein's terraced area, or the late opening Dan Murphy's Irish pub on the corner close to Melkweg. Sports fans can get their fix at either of the Irish bars or may wish to visit Café de Waard on the western side of the square to catch an Ajax match. Close by, on Raamstraat, is De Zotte, an authentic Belgian beer pub that offers a dazzling selection for any beer lover as well as good food in more relaxing surroundings than Amsterdam night life usually has to offer.

Countless other bars surround Leidseplein and many are worth at least a passing look, such as the student friendly Cafe Amsterdamned with its happy hours and special offers on beer, or the Bulldog Palace grand café, which dominates the square's eastern side and is a popular spot for British nationals.

A number of well-known Amsterdam clubs can be found close to Leidseplein, including the internationally famous Melkweg and Paradiso music venues. Both of these venues host nightclubs after the music acts have finished, with DJs spinning well into the early hours of the morning. On top of the cover charge for the night in question, a few euro will need to be shelled out to purchase a temporary membership to the club, check the websites for entrance fees on any particular night.

For the truly glamorous side of Amsterdam nightlife, the exclusive Jimmy Woo club can be found just on the other side of the block: dress to impress in this stylish, celebrity frequented club.

If you're looking for live music, then Leidseplein is definitely the place to be, Amsterdam's two most popular music venues are found on either side of the square. Very close by is Melkweg, which translates as Milky Way, a former dairy factory turned music venue that plays host to some of the biggest international acts when they visit Amsterdam. On the opposite side of the square is Paradiso, a former church now converted to host concerts by internationally famous alternative music acts. For details of gigs coming up in either of these venues, visit their websites from which tickets can also be purchased.

As well as these large and  popular Amsterdam clubs and venues, there are a number of smaller places to catch live music from local bands and less well known acts around Leidseplein. Café Alto, tucked in between the restaurants on Korte Leidsedwarsstraat, is a well-respected staple of the jazz scene, offering live jazz every night, while on nearby Leidsekruisstraat is the Bourbon Street blues club, where you can catch live blues and rock bands just as often. Around the corner from this is The Cave, a hard rock and metal bar that offers live music every Friday and Saturday night.

If noisy bands and sweaty crowds aren't your thing, Leidseplein has a number of calmer options for a night out. First and foremost is the Stadsschouwburg theatre, where visitors can catch anything from a Shakespeare play to more modern works by Dutch writers and Amsterdam's own theatre troupe, Toneelgroep.

More light hearted entertainment can be found in Boom Chicago, a comedy club sitting on the western edge of Leidseplein that offers improvisational comedy in English as well as dinner and late night drinks at the Chicago Social Club. The Comedy Café, beside the Hard Rock Café on nearby at Max Euweplein, also offers a nice selection of comedy nights for some light hearted Amsterdam nightlife. Check their website for details, and be sure that the show is in English before you buy any tickets.

Leidseplein square in Amsterdam on the map