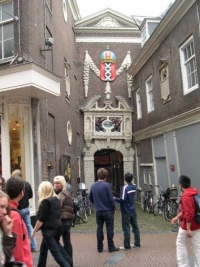 This gallery of old portraits of wealthy Amsterdam citizens, is free an easily accessible. It is managed by the Amsterdam Museum.

The exhibit is not big, but it leaves a lasting impression. Here are the wealthy citizens of the city, who traditionally belonged to the Civic Guard and spent their free times on a shooting range practicing their musket shooting abilities. Usually, this was primarily a social occasion - to meet, talk and drink beer. On another portrait the hospital governors are represented during their meeting while on another stately portrait you may see their wives, as the members of the charity society. These portraits were commissioned each year to commemorate civic guard service and charity work. Each of the citizens had to pay for its presence on the painting. A usually high fee, in a natural way, eliminated less important citizens from these group representations.

Great master painters as Hals or Rembrandt, were competing for the group portrait orders and Rembrandt's most famous monumental 'Night Watch' (now at the Rijksmuseum) was in fact the group portrait of the city musketeers, painted to decorate the wall of Amsterdam biggest shooting range De Doelen (Dutch for 'Targets'). 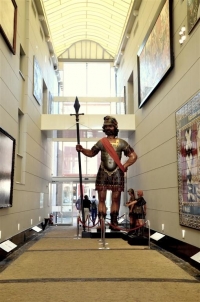 At the end of the gallery, a huge wooden figure of Goliath with two smaller sculptures of David and a Goliath's shield bearer are standing. These antique figures created in the middle of 17th century were before ages an attraction in an Amsterdam amusement park, thus they were never meant as art. Here, at the Civic Guards Gallery, they look like gone astray from the nearby Madame Tussauds.

You may enter the Civic Guards Gallery from Amsterdam central commercial street - Kalverstraat 92, during your visit to the Amsterdam Museum (formerly Amsterdam Historical Museum) walking through the gate at St. Luciensteeg 27 or from the quiet courtyard of Begijnhof (via Grote Begijnhofsteeg and to the left).

Schuttersgalerij Amsterdam on the map