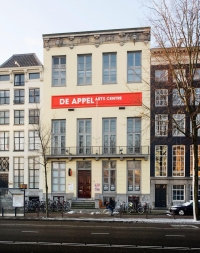 De Appel is an exhibition space for discovering what is new and important in modern art. Together with long time renovated and only recently reopened Stedelijk Museum, De Appel is the most important exhibition space for the contemporary art in Amsterdam. Since its creation in 1975, De Appel Art Centre served as a platform for the events in international modern art, but also as a research centre, publishing house, educational institution, an art library and an artistic archive.

The accent has always been on visual arts. Past art performances at De Appel are now part of the modern art history. The foundation lost couple of years ago its permanent location at Nieuwe Spiegelstraat and had to change locations numerous times. It is only in May of 2012, that Princess Maxima of the Netherlands opened De Appel’s new quarters in the renovated townhouse at the Prins Hendrikkade in Amsterdam.

The tradition of De Appel

Dutch artist Wies Smals gave first performances in 1974 and a year later, he established De Appel in the old warehouse at Brouwersgracht, as the art performances center. De Appel became renowned in Europe and its name and a red apple logo were recognized by the art lovers years before the Apple Computer Inc. corporation was established in Cupertino in California (1976, incorporated 1977). Since 2003 until 2014, Belgian curator Ann Demeester, an art critic and writer, a long time assistant to the famous Belgian museum guru Jan Hoet, led De Appel. Presently an Italian curator Lorenzo Benedetti is an artistic director of De Appel.

De Appel publishes its own books and since 1994, has established eight months long Curatorial Program, teaching future gallery owners and modern art museums curators. Apart from theory lessons the program includes workshops, art travels, practical assignments and confrontations. According to De Appel in the focal point of this training is “context-responsive curating” when presenting modern art to the wider public. 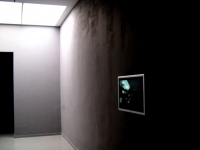 De Appel is located near the Red Light district, facing the new Public Library, on the opposite bank of the former Amsterdam harbor. This is a quickly changing, full of energy part of the city. This energy flows through each not very big De Appel’s exhibit. Young people who visit De Appel mix in the street with the Red Light District public. Seeing De Appel show seems essential for the modern art lover, while to most of general public their exhibits may seem hermetic, exclusive and experimental.

- De Appel accepts cash and debit cards. Credit cards are not accepted.
- De Appel has a wheelchair access. You are kindly requested to inform De Appel in advance about your visit. 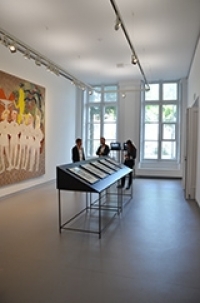 De Appel receives many portfolios from the new artists proposing their work. While always interested in new art, De Appel is not able to return the portfolios by mail. You are requested to make an appointment to collect your own portfolio.

Restaurant and a museum shop at De Appel

A sympathetic, modern, offering fresh local food restaurant Moes is located in the basement of De Appel art centre. Its menu changes every week and it is accessible directly from the street, without an admission ticket.

How to get to De Appel

De Appel Art Centre in Amsterdam on the map