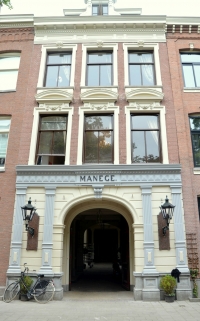 It is easy to overlook this building hidden behind 19th C.  townhouse close to Amsterdam central park - the Vondelpark. Despite the fact that De Hollandse Manege – the Dutch Riding School is well visible from the Overtoom Street (at no. 187), there is no access to it from this side. While a bit hidden, The Living Horse Museum is a still active horse riding school, established in 1744. Because centuries ago the school was one of the largest covered spaces in the city, it is at the Manege (then yet on another location) that 10 years old child prodigy Wolfgang Amadeus Mozart concerted in January of 1766.

The beautiful historic building of the De Hollandsche Manege was built in 1882 in neoclassical style, inspired by the Winter Riding School (Winterreitschule) of the famous Spanish Riding School (Spanische Hofreitschule ) in Vienna. The Hollandsche Manege building was thoroughly renovated in 1986 and is very well preserved. The school has a big main riding hall, another smaller hall, and a foyer with a balcony above to observe the riders and old stables for 35 horses and 15 ponies. The school had originally a carriage house located at its back, demolished in 1969.
The 19th C. atmosphere has been preserved in remaining buildings in all its glory. Today, because of the demands from the animal protection movement, horses from De Hollandsche Manege may also ride outside the school, in the parts of the nearby Vondelpark. 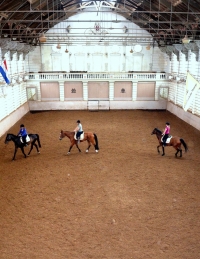 An old riding school near the city old center, still active. The name of the museum says it all – apart from the building and living horses, there is not much more to visit. A cup of a good coffee or a small meal at the foyer and a projection of a short film complete the show. Even so, the atmosphere of the place is unique and the museum may be a great fun for horse lovers and kids. 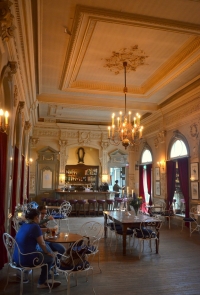 Admission ticket includes a cup of tasty coffee or tea in the museum’s second floor foyer and a short movie screening about De Hollandsche Manege.
A single horse-riding lesson at the Manege starts at €30 for half an hour. Consult their website for more prices.
Flash photography in the riding school is not allowed.
Only the ground floor of the Manege is accessible for the handicapped.
The museum has a small shop - Hollandsche Winkel selling souvenirs and snacks for the horses. It is not allowed to feed horses with food not purchased at the Manege. In addition it is not allowed to enter the stable stands.
Under the guidance of an instructor, you can rent a horse to ride in the forest.

Walking: 10 minutes from the Leidseplein
By public transport:  from Central Station - tram 1, bus 353; exit on stop Overtoom, walk to Vondelstraat – the street parallel to Overtoom; walk along Vondelstraat to reach no.140
from other spots in the city - also trams 3, 12
By car: from the Ring A10 take an exit S106 direction Centrum/Oud West, on the roundabout stay to the right and immediately after, before the bridge (Overtoomse Sluis), stay on the left, take left after the bridge, drive to the number 187 on Overtoom – you are at the gate of Hollandse Manege, but this entry is always closed you will have to walk to the front entry from Vondelstraat; look for a parking place: metered parking at €4 an hour, walk to the Vondelstraat – first street right and again right parallel to Overtoom