This large municipal park serves culturally diverse neighborhood of East Amsterdam. Many newcomers to the city from Suriname, Turkey, Morocco and more recently from Eastern Europe, live in the area. Oosterpark is their area for walks and picnicking. 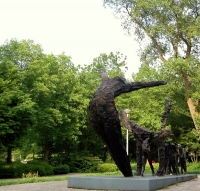 Oosterpark has been the first big public park created by the municipality in Amsterdam. It has been designed in 1891 by Leonard Antonij Springer (1855-1940), one of the foremost landscape architects in the country, son of a known realist painter. To construct the sizable park, the municipality decided to remove a cemetery from the area and to demolish some smaller estates. Singer, later a prolific park and garden designer, author of almost 900 different projects, planned the park around an elongated lake giving it free English landscape style, which until today dominates the Dutch landscape architecture.

Oosterpark features several important monuments and numerous sculptures. The National Monument of the Slavery (Nationaal Monument Slavernijverleden) by Erwin Jules de Vries, Surinamese born artist, commemorates abolition of slavery in the Netherlands (1861). Another big monument, 4,5 meters (almost 15 feet) high modern sculpture by Jeroen Henneman called “The Scream” (“De schreeuw”)– is a memorial of the film director Theo van Gogh (1957-2004), a distant cousin of the painter, murdered in 2004 by a Muslim extremist in the street nearby the park. According to its creator “Theo screams in this sculpture for mercy”.
Smaller “Flame” – a big abstract made from stainless steel pipes by contemporary artist and writer Jan Wolkers, commemorates Dutch literature movement called De Tachtigers. A sympathetic small bronze depicting three men sitting on the bench called “Titaantjes” by Hans Bayens is a monument to a writer Nescio and his colleagues. The bronze “Goat rider” (“De Bokkenrijder”) is by Gerrit Boluis, “Playing Childern” are by Kattinka van Rood, the ornamented bench from white stone is by Eduard Jacobs. It commemorates the writer Justus van Maurik (1846-1904).

Since 2005 an especially placed stone marks a public place dedicated for the free speech; similar to the Hyde Park corner in London. Several smaller sculptures make a visit to the park even more interesting. 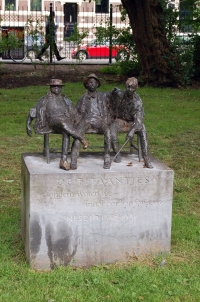 Oosterpark has a large population of wild birds. Grey herons are the most visible, but you may also spot parrots, rare in the wild in Western Europe. Shadowy western edge of the parks lake is full of wild ducks. Many other birds have also nests in the park, so it is not difficult to observe them even during a short visit.

The park is well kept and clean, has a lot of big trees and wide, open spaces good for a picnic. Happily numerous birds are secluded in one corner of the Oosterpark. A fenced children’s playground is fun for kids.

How to get to Oosterpark

By foot: from the Tropenmuseum, the park is located just behind the museum;

By bus: line 22, exit on a stop Eerste van Swindestraat;

By car: driving from the A 10 ring, take an exit S113 and drive direction the city centre for about 5 km along Middenweg and later Linnaeusstraat. The park will be on your left soon the Linnaeusstraat will cross the rail track. There is a metered parking in the area.

Oosterpark in Amsterdam on the map